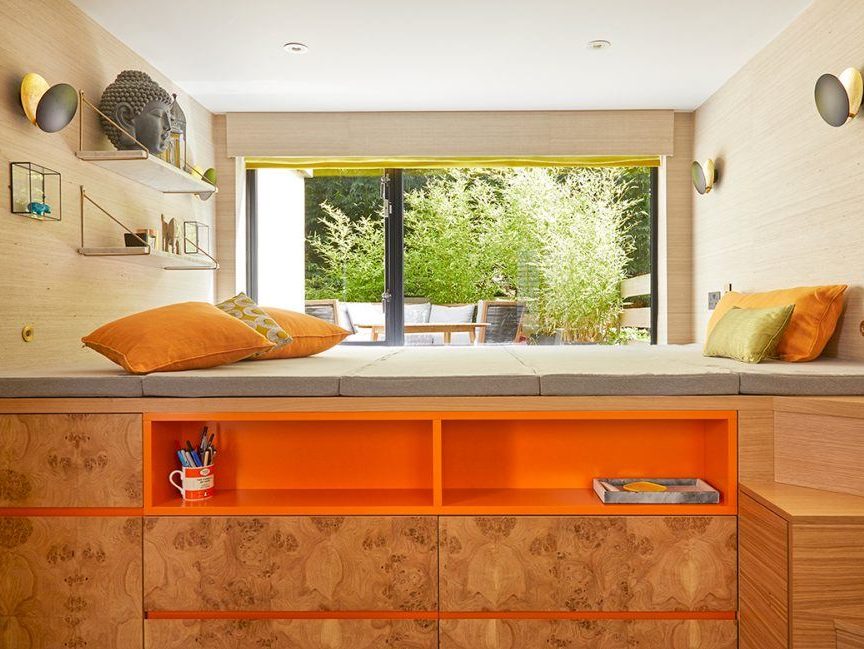 Perhaps the I may be guilty of slightly romanticising the sentiment, but there’s a rather curious parallel that can be drawn between the study and the times. In times past, the study was an erudite nerve centre of the home, a transition point between the home and the outside world- and certainly, in much the same way both time and society moved on, the study too, grew into a freer space, just as much a backdrop to artistic pursuits as it was to commerce or old-world diplomacy.

Though the study has undeniably evolved by way of its function, the vernacular by which the physical space is defined has remained somewhat unchanged and is often insufferably ‘officey’. At some point, it simply failed to keep pace with our broadening thought and sense of modernity. The industrious desk, the office chair, the uniform bookshelves and the tabletop work lamp have all endured as constants, drab and immutable markers of the space. This has given rise to a tired convention which has arguably made the concept of the study somewhat stale; we simple know what to expect, and by that token, are frequently left a touch uninspired by the studies we encounter.

Nestled amidst the streets of London’s Tufnell Park is a study belonging to a modernist townhouse that breaks the mould. The work of Kia Designs, this study is a bespoke composition, a highly functional environment that boasts inventive uses of space that not only gives it a look that is wholly unique, but also fashions it as a space with the capacity to adapt, changing to the needs and requirements of its owners. We take a tour of this striking and original space, paying close attention to Kia Designs’ use of form, texture and tones in achieving a quintessentially modern study space.

When first encountering the study, it is difficult not to be impressed by sense of architectural and geometrical drama that Kia Designs incorporates into the room. Its space is split over two levels: the first being the floor level through which the room is accessed, and the latter being an elevated platform clad with bespoke cushions so as to create a peaceful and meditative environment. 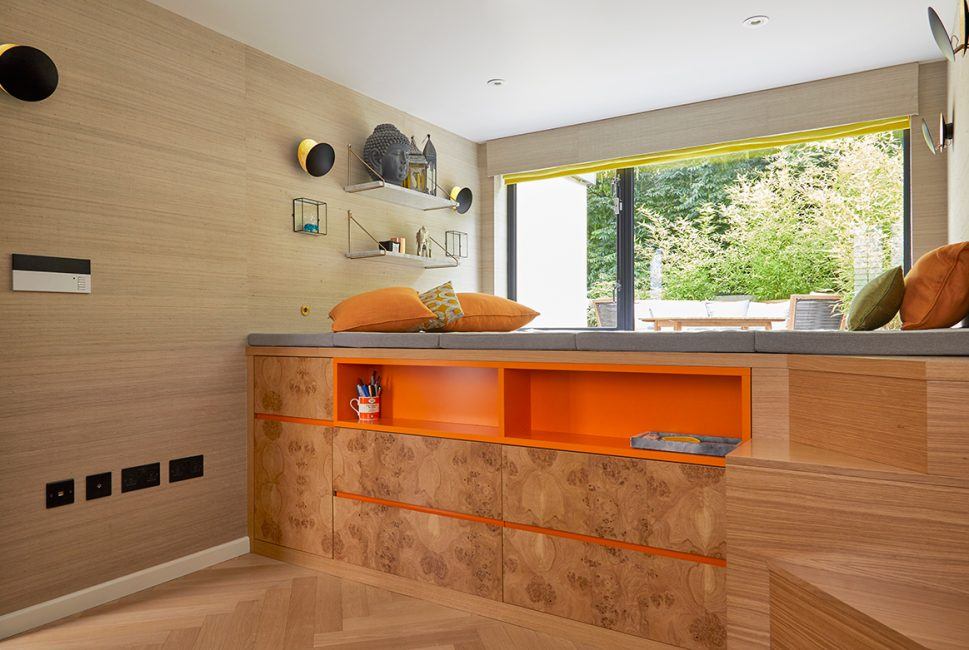 Certainly, the study’s bold lines evidences Kia Designs’ forward-looking vision for the space whilst also noting a very conscious break from the tired narrative of the conventional study. The room’s two zones provide options to the way the space is experienced. The ground floor level plays to tradition, featuring a large, pull-away desk that is incorporated into the frame of the platform. Shelving units that are similarly embedded into the side of the platform’s frame ensure that stationery and books are all within arm’s reach, maximising productivity and workflow. 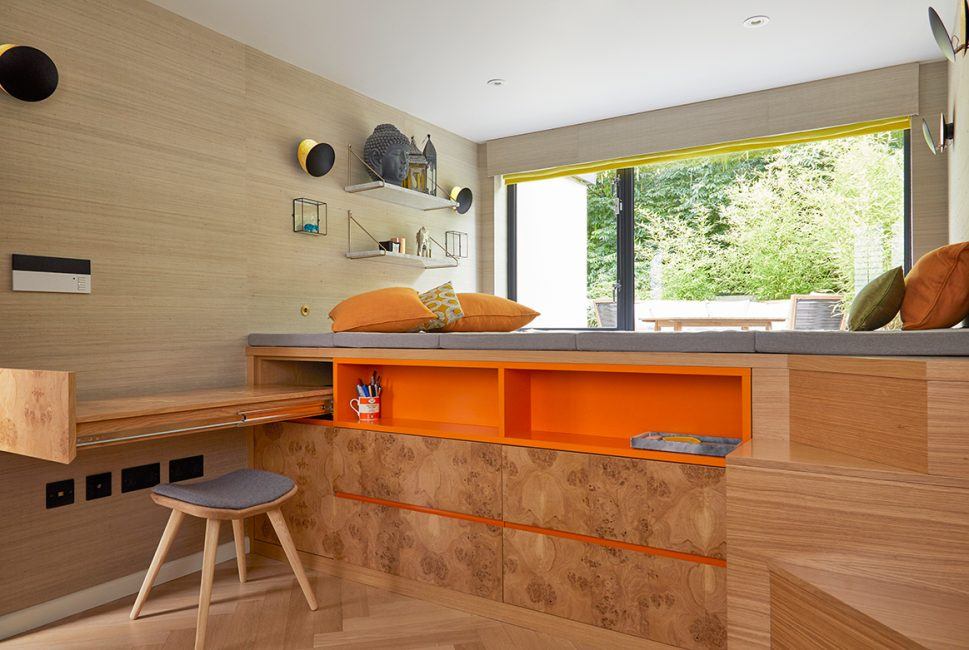 In contrast, the room’s elevated platform is a freer space, maintaining both an air of tranquillity and an inherently serene atmospheric arc which binds the home together. Adorned with bespoke cushions and unencumbered by furniture, Kia Designs fashion the platform section as a distinctly creative space and expressionistic space ideal for yoga stretches, meditation or music making. 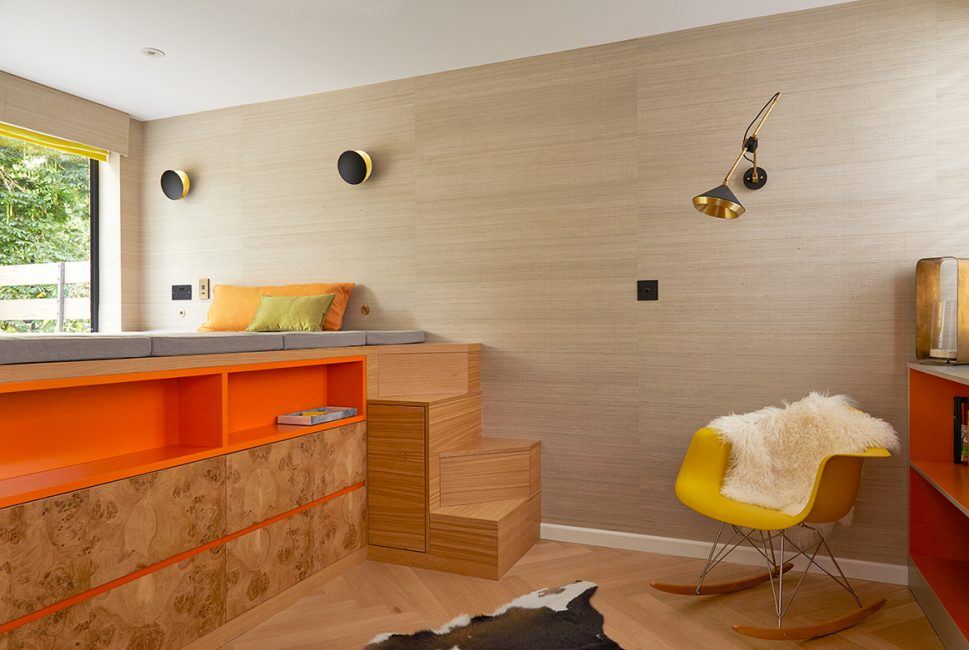 Additionally, Kia Designs formed the platform level with so that it had a trick up its sleeve. As with most modern city homes, the study is a multifunctional space- and one capable of evolving with the needs of the owners that frequent it on a daily basis. The cavity below the floor platform conceals a bed, which can be brought to the surface level and repacked with tremendous ease. Similarly, the space in the room’s lower decks is also a fantastic storage solution, allowing for easy and practical concealment of bulky items, such as suitcases, that can be retrieved without breaking a sweat. 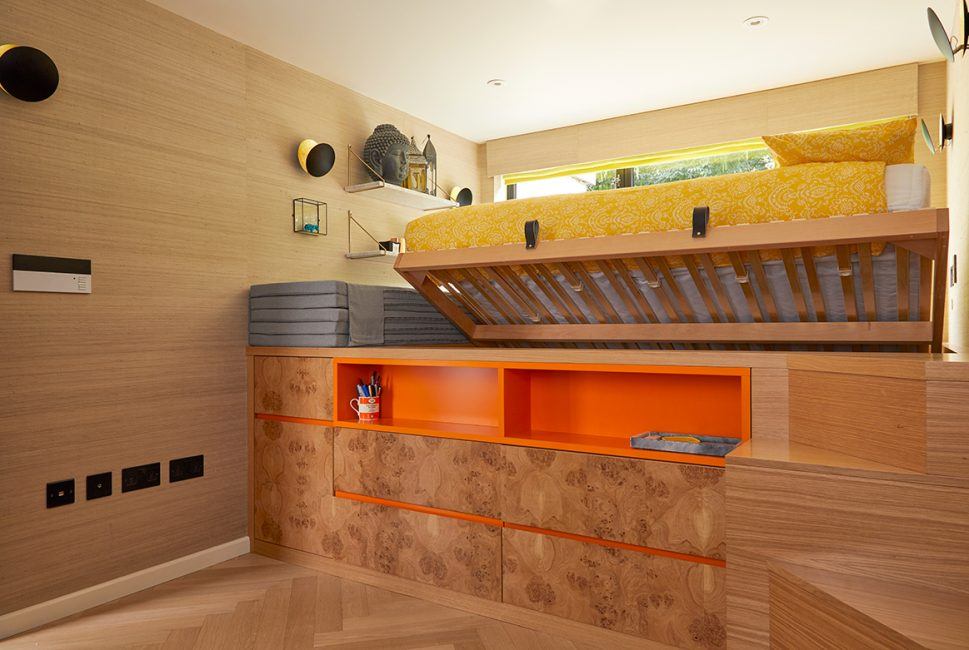 Kia Designs’ masterful use of natural light was integral in injecting a lightness and expansive quality to the room. This was achieved through optimising the use of large feature windows, running almost the entire surface area of the wall that adjoins the elevated platform. Consequently, every section of the study is gorgeously illuminated. This emphasis on lightness is also carried in the room’s foundational textural and tonal palettes. The ceilings are finished in a delicate, creamy off-white which serves as a gorgeous counterpoint to the textured wallcoverings and herringbone parquet that adorn the walls and floors of the study. Here, the richness and complexity of the grain patterns adds a depth to the room, whilst also adding to the natural feel vital to space’s meditative focus.

This sense of lightness is also reflected in a philosophical vein through the Scandinavian-tinged, modern-minimalist style that marries the study’s various pieces of furniture. With a focus on simple forms and clean, elegant lines, Kia Designs’ discarding of weighty and superfluous frills allows for the space to breathe, adding to the desired airy quality. Similarly, the style perfectly accommodates the tonal accents that Kia Designs etch throughout the room. Resplendent pastel oranges and lime greens inject a punkish and youthful energy to the space, working with the study’s light, airy elements to concoct an invigorating and vitalising ambience.

A true testament to the robustness of the study’s textural and tonal palettes is the ease with which it accommodates a myriad of different styles of furniture and decorative pieces. The space marries youthful and gorgeously electric midcentury touches, such as the Eames rocking chair with the rusticity and historical complexity of oriental-inspired pieces, such as the antiqued figurines and glassware that adorn the shelves. These elements never feel forced or congest the room, on the contrary serving as components that are organic and wholly natural to the space’s unique narrative. These historically and culturally separate styles are brought together by Kia Designs with astounding grace and finesse.

If by studying the study, per se, we can simply hold onto one take-home sentiment, it would simply be confidence. The study breaks from the tired vernacular of conventional design, on the contrary, brandishing its own bold cartographies and architectural play so that it a wholly functional and bespoke creation, built for the owner. This energy and sense of bravado is also carried in the way the space is composed. The study coolly brings together modern minimalist and Scandinavian architectural elements, itself crowned with mid-century and oriental ornamentation. This undeniably gives the study its own spirit and charm, a space that is built to inspire create output and facilitate mediation without compromise- in that sense, a study in the truest sense of the word.

And Breathe! A beautiful designer hotel and oasis in the heart of Amsterdam 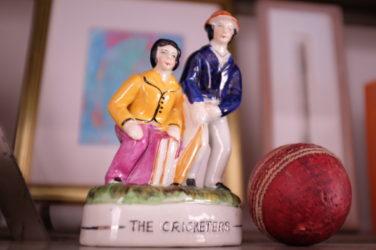 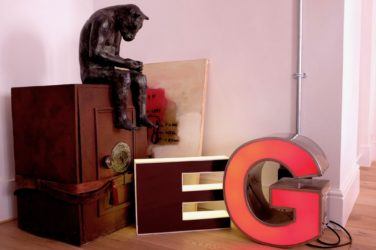 Welcome to The Cricketers! A charming rural renovation

Today's house tour is of a renovated coaching inn in Stockbridge, near Winchester in ... 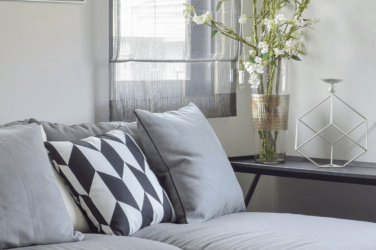 Secrets to Styling Your Sofa

You’ve spent ages choosing the right sofa but now it’s in your home, it ... 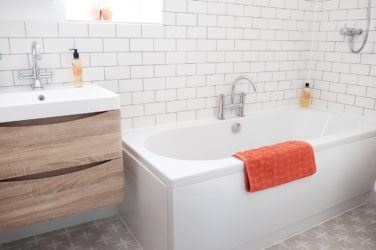 Bathrooms are often the smallest room within a home yet we require them to ...