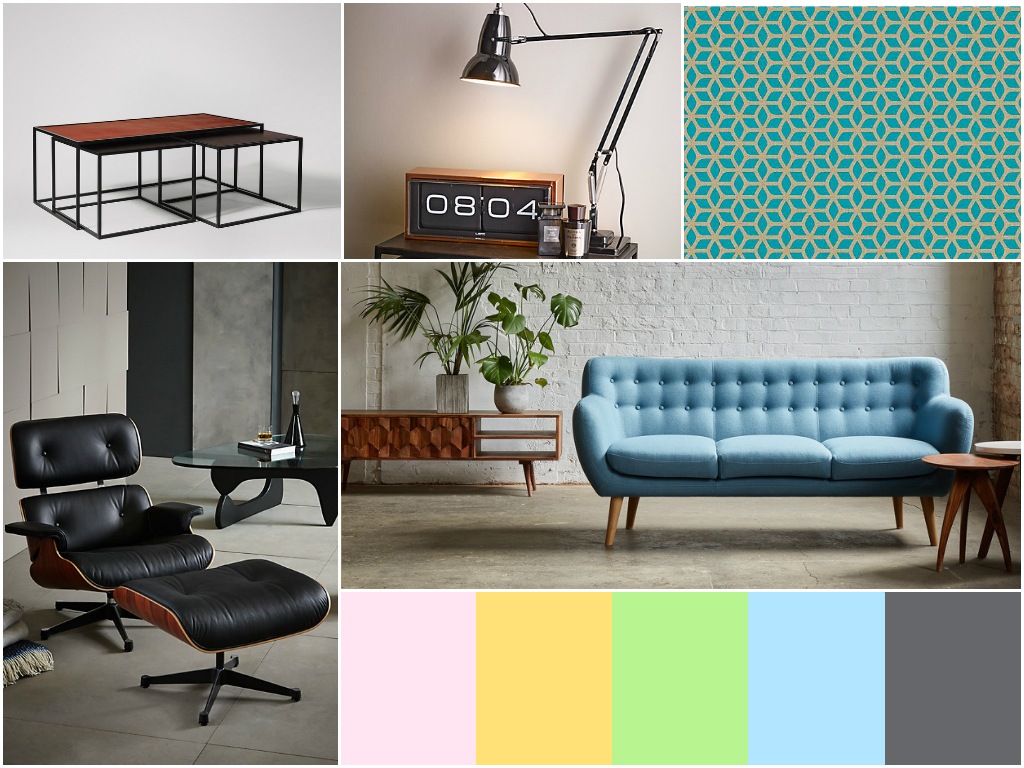 New to The Idealist and fan of all things Film Noir and Mad Men, Nigel presents a stylish look at the midcentury style, teeming iconic furniture with the instantly recognisable midcentury palette and updating the look with some great high street finds.

The mid-twentieth century was undoubtedly an exciting and an invigorating time.  The jet age made the world’s most exotic destinations accessible to the masses, redefining mile-high glamour. Similarly, feverishly competitive space programmes shattered the myth of outer space as the great unknown. The era also broke the mould. Echoing through the radio airwaves, the sound of rock n’ roll inspired youths to hail the two finger salute to the conservatism of former generations. The period bristled with a youthful energy, a boyish self-confidence, and the colour scheme of the mid-century captured the era’s excitement and forward-looking attitude.

The mid-century design ethos broke from the archaic and stuffy frills of the traditions that preceded it. Clinical black and grey tones outline the imaginative and playful shapes that emerged from this era.

The steely precision of these structural colours are often complemented by mellower notes of pastel blues, candy-floss pinks, pistachio, off-whites and creams, where these too, are offset by accents of louder turquoise, mustard yellow and rusty orange-brown notes. The midcentury designers used a lot of wood in furnishing, flooring and on walls, so all the colours you use must sit well with wood and metal. 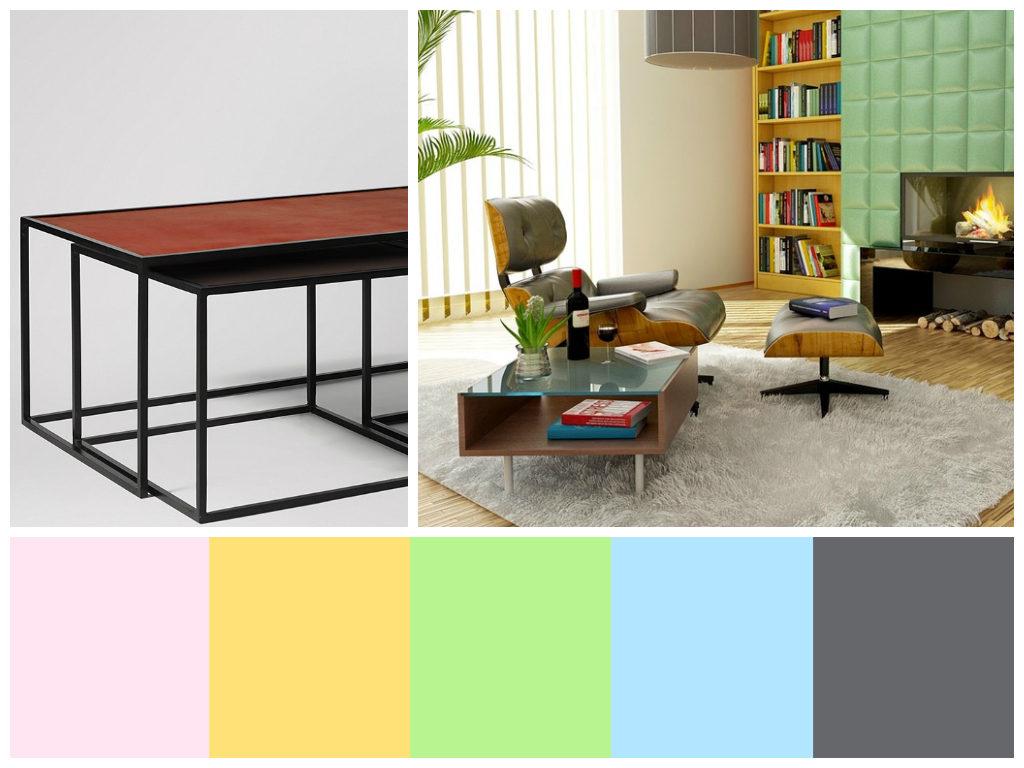 Geometric prints reminiscent of the era tastefully marry the above tones and go a long way in getting the mid-century look. Exuding a design philosophy of clean lines and no-frills, these aspects make mid-century design elements particularly well-suited to a variety of home designs from minimalist art-deco to modern industrial.

Incorporating mid-century elements in your home

Coming from an era where the rulebooks of ‘ole were thrown out the window, the mid-century colour palette is similarly playful and adaptable to a variety of interior design styles. Nonetheless, a large, open-planned room with exposed wood flooring and off-white walls would provide the perfect blank canvas to foil vibrant mid-century tones. These elements are bold, elegant, and certainly capable of doing much of the talking for your room.

That said, to pull this look off well, consistency is the word. Sticking to a few core colours and prints keeps the room light and uncongested and is a brilliant way of tying the space together. It is also a perfect opportunity for you to stamp your individual identity.

The shape of things to come

Imaginative shapes are a cornerstone of the mid-century design method. Bold re-imaginations of classic pieces of furniture are an excellent way of incorporating this style into your home.

A prime example of this is the Vitra Eames Lounge Chair and matching Ottoman. 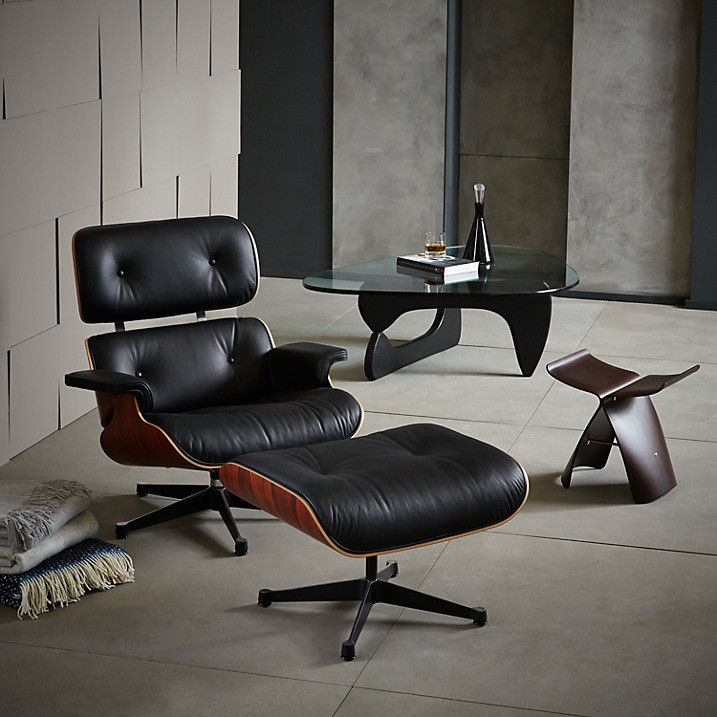 Designed in 1956 by the legendary Charles and Ray Eames, this truly timeless design serves as a mid-century update of the classic British lounge chair. Finished in black Italian leather and Palisander, a Nicaraguan species of rosewood, these luxurious elements are reconfigured into an adventurous, space-age design, married to an aluminium frame which, like the leather, is also finished in a jet black. Set against a plain wall, the Vitra Eames Lounge Chair oozes a notably mid-century brand of sophistication. £6,138 – with ottoman. 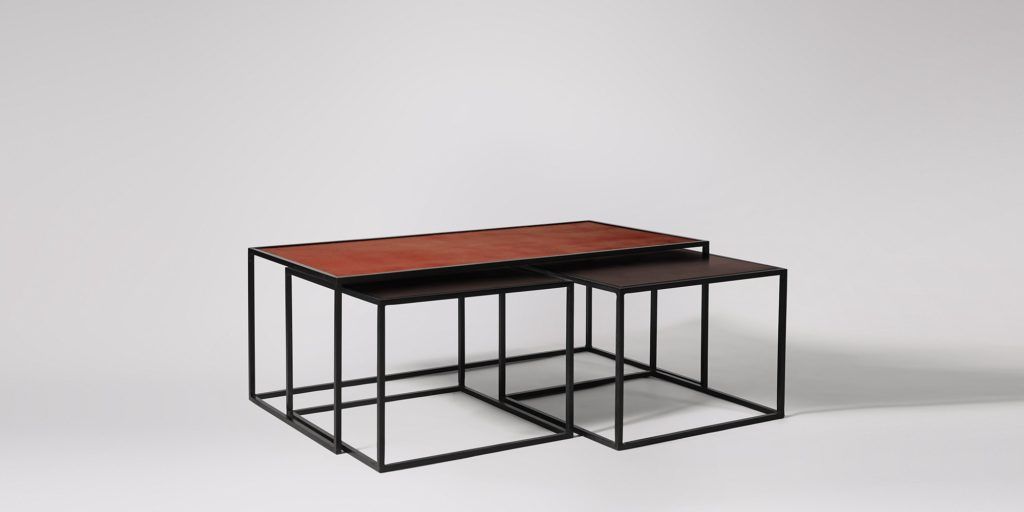 The Coppola Coffee Table Set from Swoon makes for a potent colour pairing with the Vitra Eames Lounge Chair, playing on the blacks and browns of its design. Consisting of a larger table, the top of which is finished in tan leather, and two smaller tables with tops clad in dark bronze, the rustic browns and no-frills black frame heavily draw from the mid-century colour palette. Furthermore, the three tables can be arranged to get the most out of your living space. £ 399. 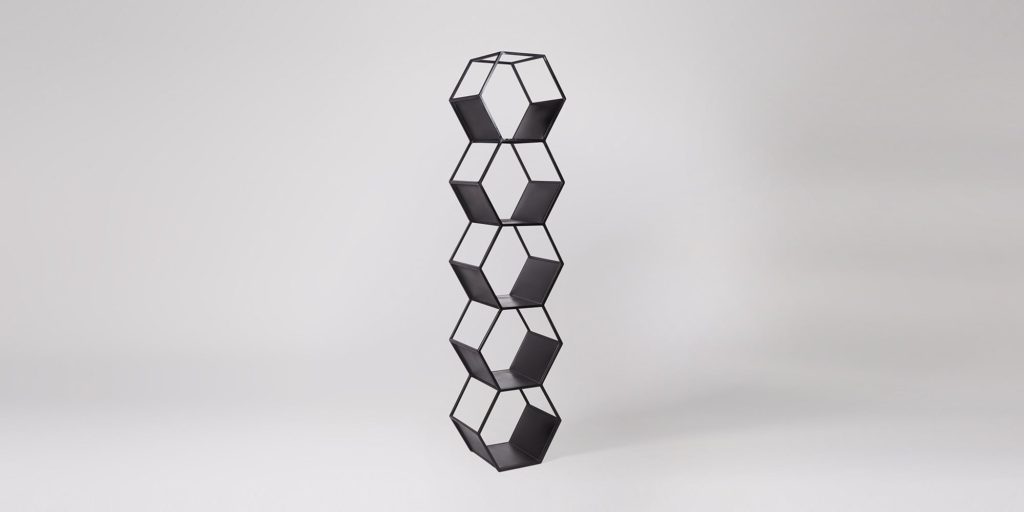 Also from Swoon, the Hex Shelving Unit epitomizes a notably mid-century play with form. Its hexagonal design is made all the more striking by its silhouette-like, jet-black finish. It’s sure to make a statement. £279

Pastel tones in fabrics are a staple of the mid-century colour palette and a great way of adding an air of lightness to your home whilst still maintaining the style.  The Mimi Sofa, also from Swoon, is the ultimate mid-century statement. Hand-upholstered in Powder Blue, its colour and streamlined shapes will be sure to inject a notably fifties, Cadillac glamour to your home. £699. 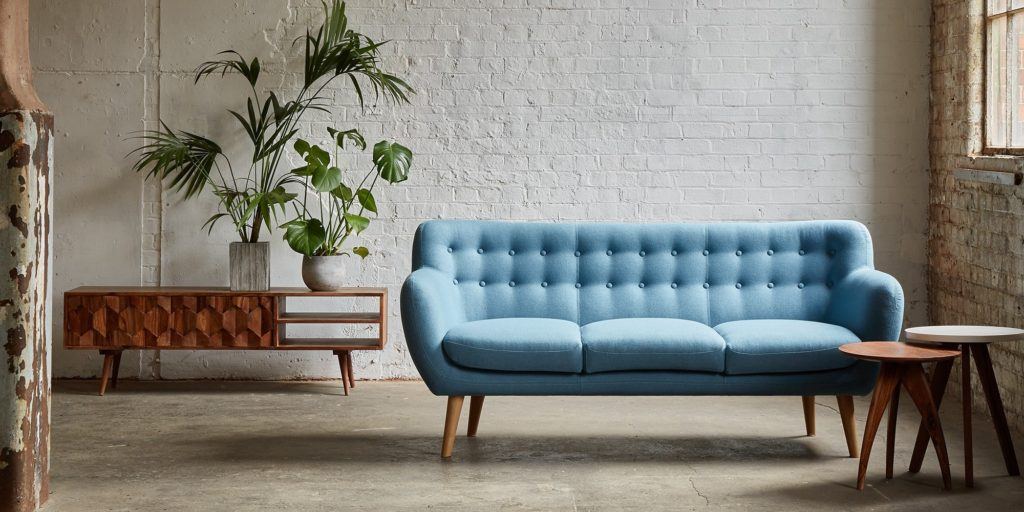 Geometric prints stand in testament to the era’s infatuation with modernity and forward-looking nature. It’s also another excellent way of getting the mid-century look for your home. 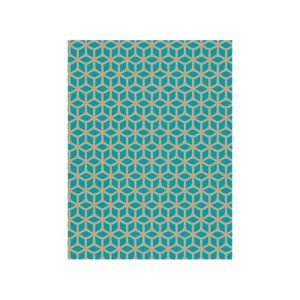 We particularly love the Harlequin Wallpaper from John Lewis. Boasting a bluey-teal base accented by a fine, gold, angular print, the wallpaper would make for a fantastic feature wall. Its colours also pair wonderfully with the Mimi Sofa, neatly bringing the room together. £93 per section.

A rug is another golden opportunity to display mid-century prints and own the era’s colour palette. The Sierra Rug from Swoon plays on off-whites and navy / off-white and mustard tones. Woven into a lattice pattern, it makes for a great accent point whilst also being able to discreetly blend in. Both designs that Swoon offer would beautifully match a mid-century colour scheme. £199. 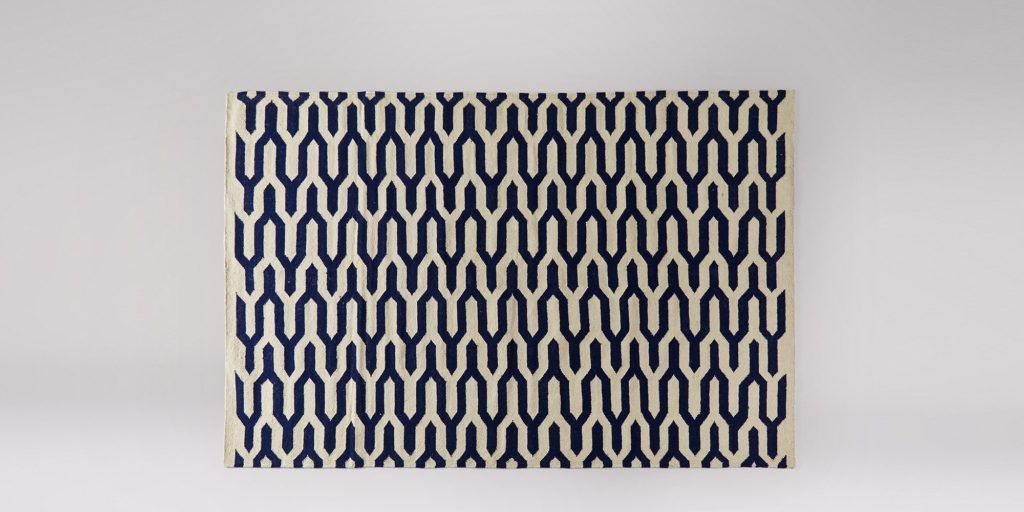 Design pieces for the home run 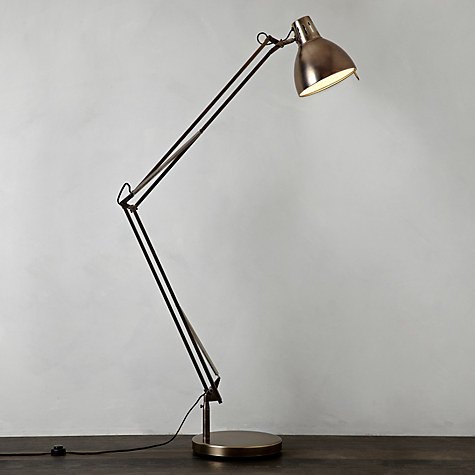 The antiqued chrome finish on the Hampton Lamp from John Lewis makes for a classy touch to your home. It’s slightly dulled patina makes its chrome finish less brash and in-your-face, rather, gracefully evocative of a bygone metropolitan or Hollywood glamour. £195

Similarly, the Leff Amsterdam Brick Clock, designed by Erwin Termaat and available to buy from John Lewis, is another piece we’re all slightly in love with. Its flip-mechanism display is reminiscent of the notice boards of fifties airports. Housed in a thick copper case, it’s both a modern and gorgeously elegant addition to your home. £269. 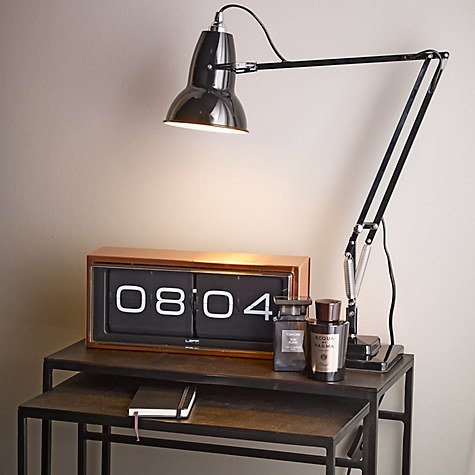 The mid-century colour palette is youthful yet sophisticated, and with a little time and thought, can infuse these aspects into your living space. When done right, the look does not age. It exudes a cool that is immune to trends and can provide this timeless elegance for your home. 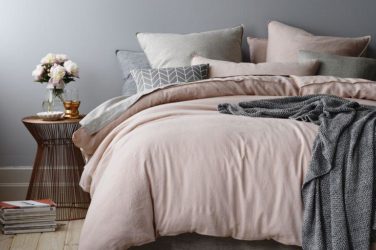 Colour to Warm a Minimalist Interior

With so many colours and shades to choose from, it can be difficult to ... 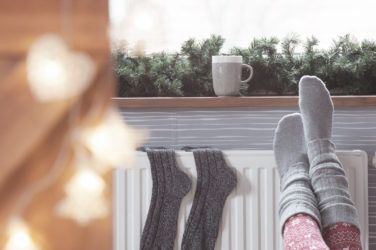 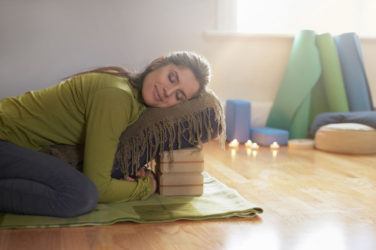 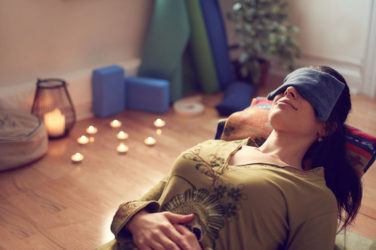 Zen Spaces for Yoga and Meditation

Life has become very fast paced and quite stressful and hectic; our day to ...