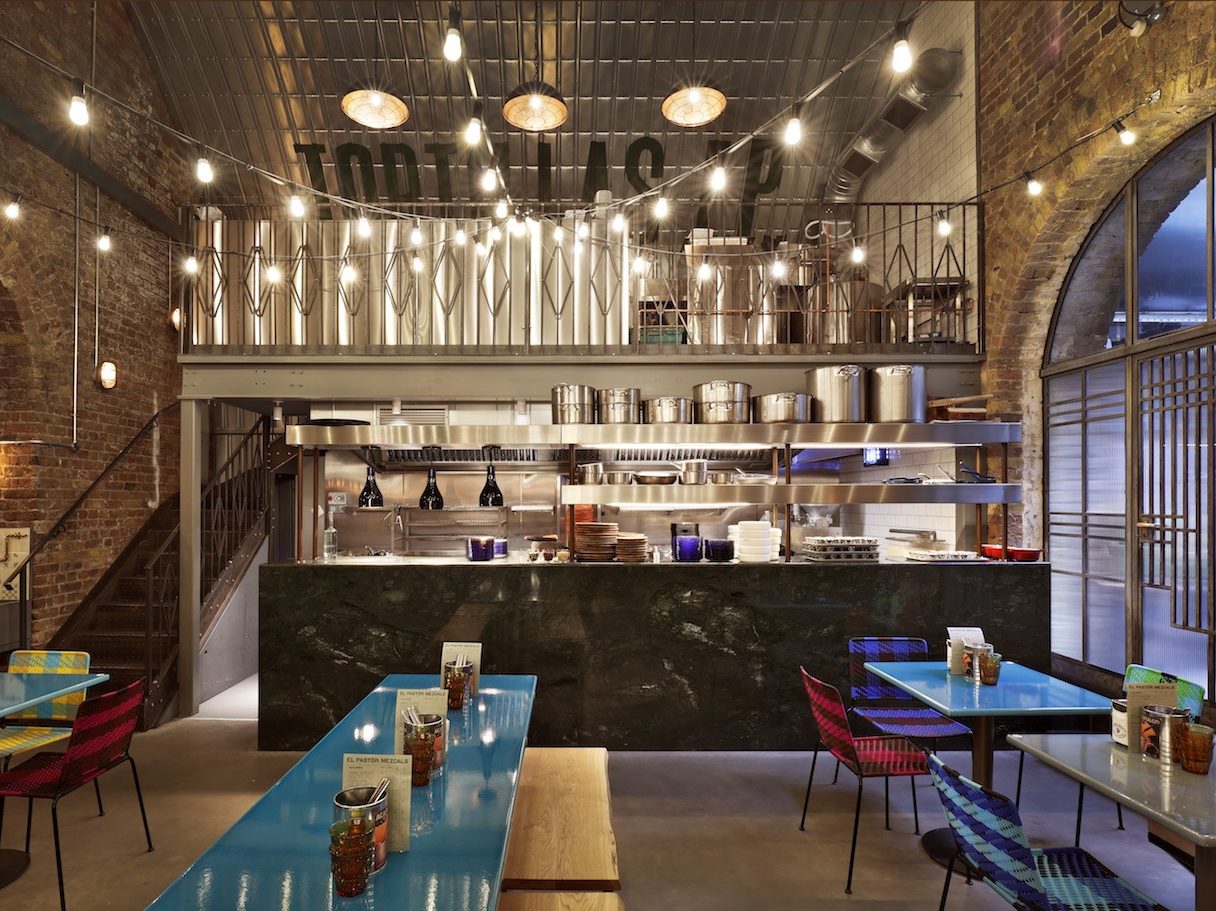 ‘My books are derived from city images, and the city of my dreams or nightmares is Mexico City.’ –Carlos Fuentes

Few places capture one’s imagination in quite the way that Mexico City does. Today one of the financial and cultural powerhouses of Latin America, the very thought of the city’s sun baked plazas, the kaleidoscopic pastels of its markets and the proud murals of the country’s many chaptered history mentally sets in motion an explosion of colour -total sensorial immersion. So it’s fair to imagine the gargantuan challenge that faced the London-based architectural practice, Michaelis Boyd, who were tasked with capturing the colour and carnivalesque vibrancy of Mexico City when composing the interiors of El Pastór, a London-based Mexican restaurant that pays homage to both Mexico City and the famous al pastor taco- brought to the country in the 19th century by Lebanese immigrants but now synonymous with Mexican culture. 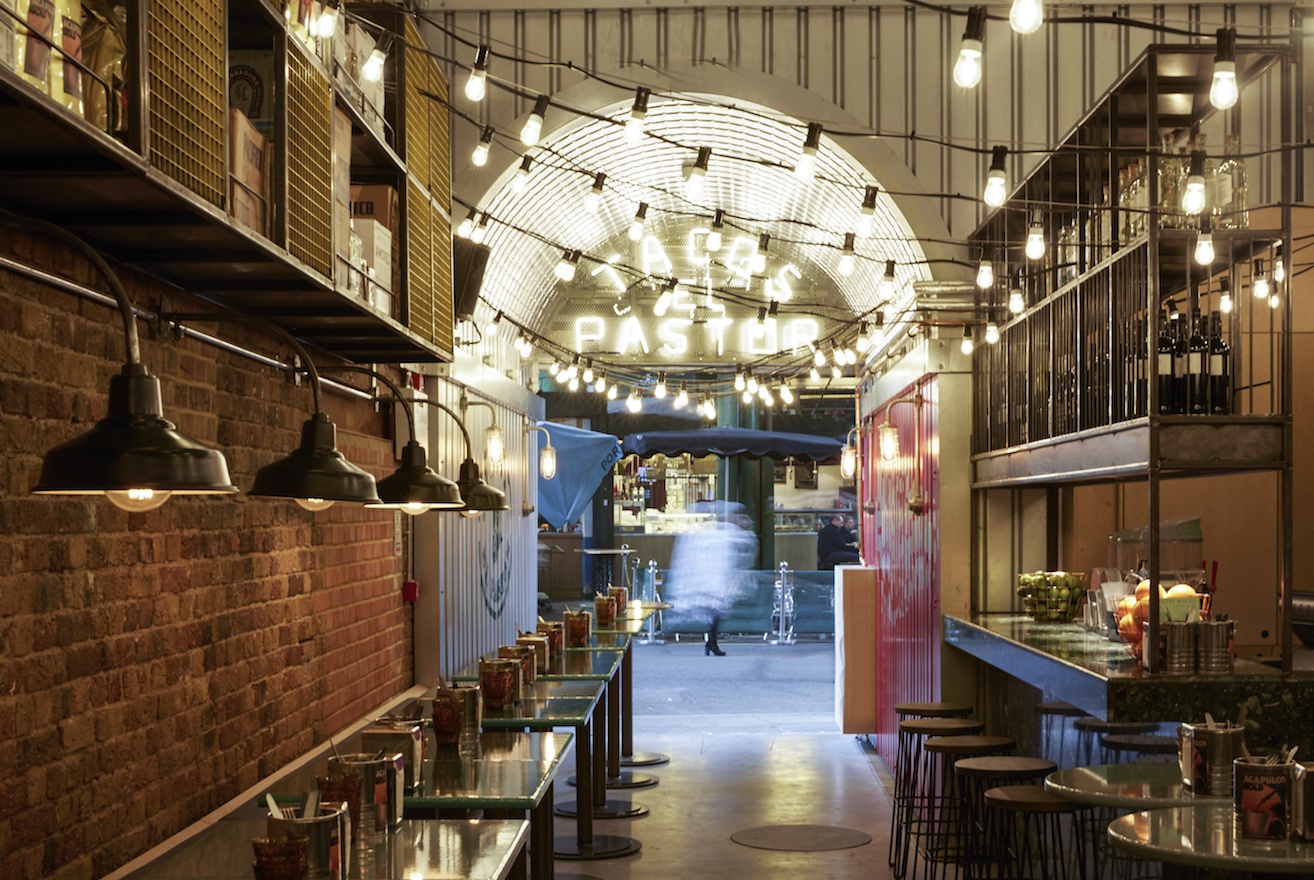 El Pastór is a joint venture between the Hart Brothers, of Barrafina fame, and Crispin Somerville, a founding partner in El Comillo, a seminal underground jazz bar located in the famous Juárez district of Mexico City. So that El Pastór depicted Mexico City with the faithful strokes, Michael Boyd, the Harts and Somerville travelled to the city, intent on authentically bottling the colour, sounds and scents of a local taqueira – a Mexican street food café. Found at No.7A Stoney Street, El Pastór’s brilliant façade, with the name resplendently illuminated in amber-tinged neon, cuts the uniform greys of that have come to characterise our fair city streets. The location also adds to the drama and theatrics of it all. Found under the railway arches that encircle Borough Market, El Pastór shuttered front suddenly refashions itself as a portal from London’s monochromic walkways to the orchestral din of Mexico City’s lanes. We take a look at El Pastór, diligently paying attention to the various elements through which Michaelis Boyd were able to channel the colour and personality of Mexico City, brought right to London’s heart. 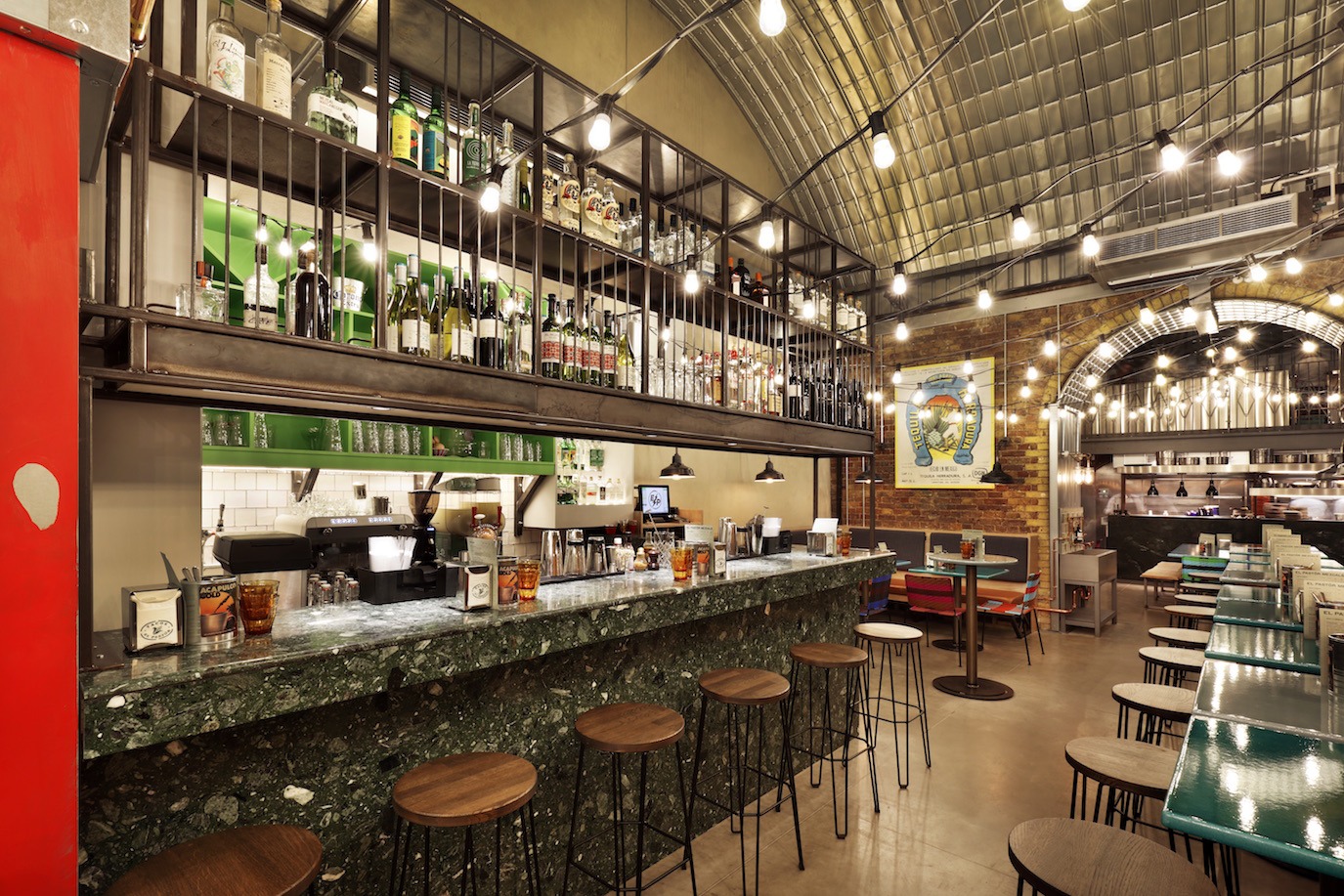 Michaelis Boyd’s goal with the interior El Pastór was to capture Mexico City’s urbanity in all its candid glory. In order to do this, much of the restaurant’s interior spaces were actually composed according to the vernacular of Mexico City’s avenues; corrugated metal sheets, shutters, and antiqued expose brick dress the walls, whilst a polished concrete floor ornaments the floor, complete with manhole covers – a perfect imitation of the city streets. Michaelis Boyd further develops this narrative through adorning the walls with hand-painted vintage advertisements and other street paraphernalia- a distinct lack of English heightens the idea that defiantly Mexican cultural mode is in operation. Shelving units, antiqued and road worn, allows for intelligent storage flexibility, whilst still retaining the raw and edgy urbanity the Michaelis and Boyd were going for. Gaze upward, and celestially floating above the dining tables are busy networks of light bulbs, which, in star-like fashion, kiss the space with a soft, warm glow reminiscent of the city’s night-time fiesta culture. 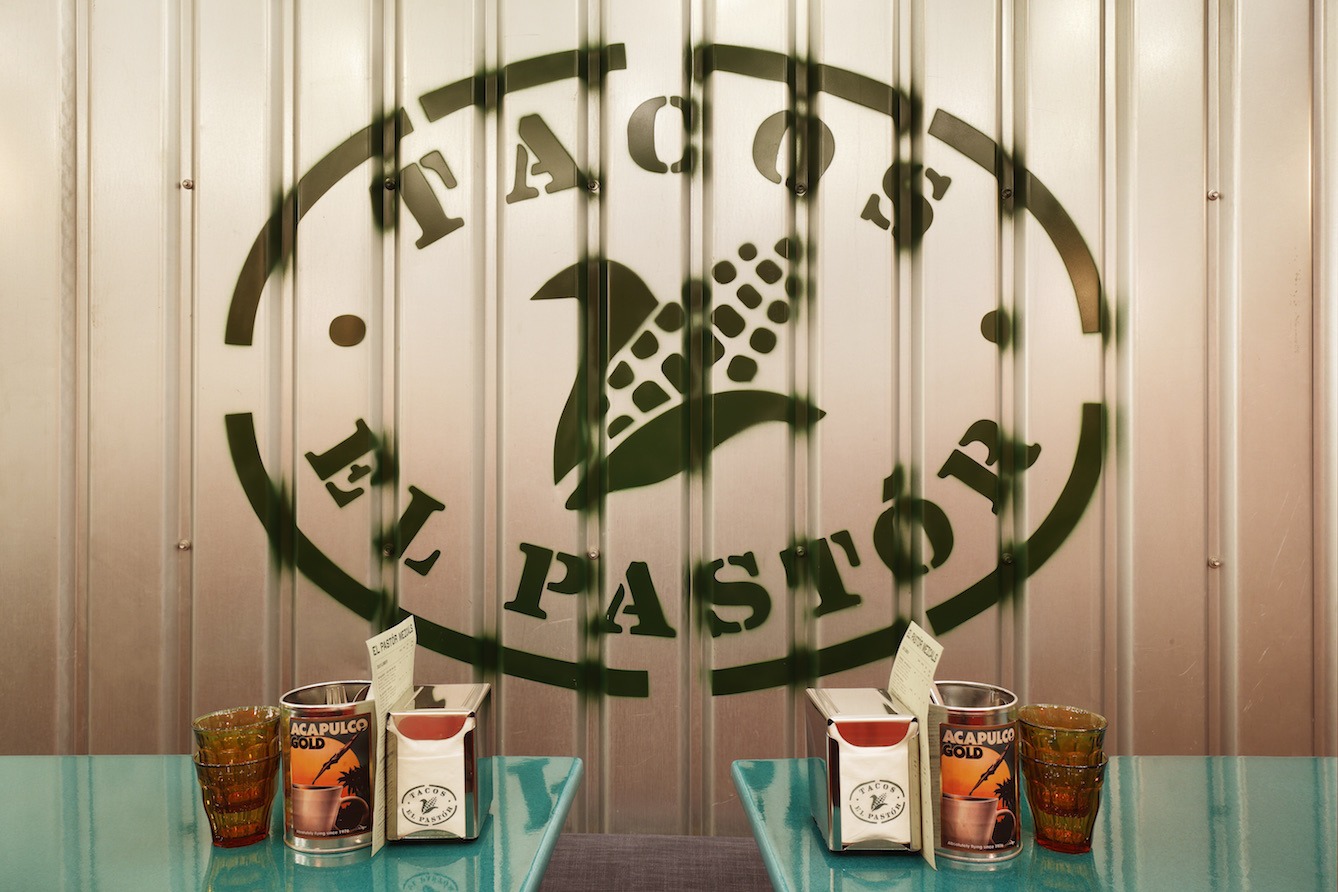 However, Michaelis and Boyd did not stop at mere, albeit astoundingly beautiful, visual imitation of Mexico City’s streets with El Pastór. When at the restaurant, diners are immersed in an authentic cultural dialogue, caught in the middle of the action in Mexico City’s streets. Michaelis Boyd achieve this through the inclusion of a real tortilla factory on a mezzanine floor, bringing with it the sights, smells and sounds of Mexico. Similarly, inspired by the city’s food markets, Michaelis Boyd created a mezcleria, finished in a breath taking emerald green marble conglomerate. Immediately behind the bar, the back wall is dressed with both fruit and glass bottles, just as they would be in Mexico. 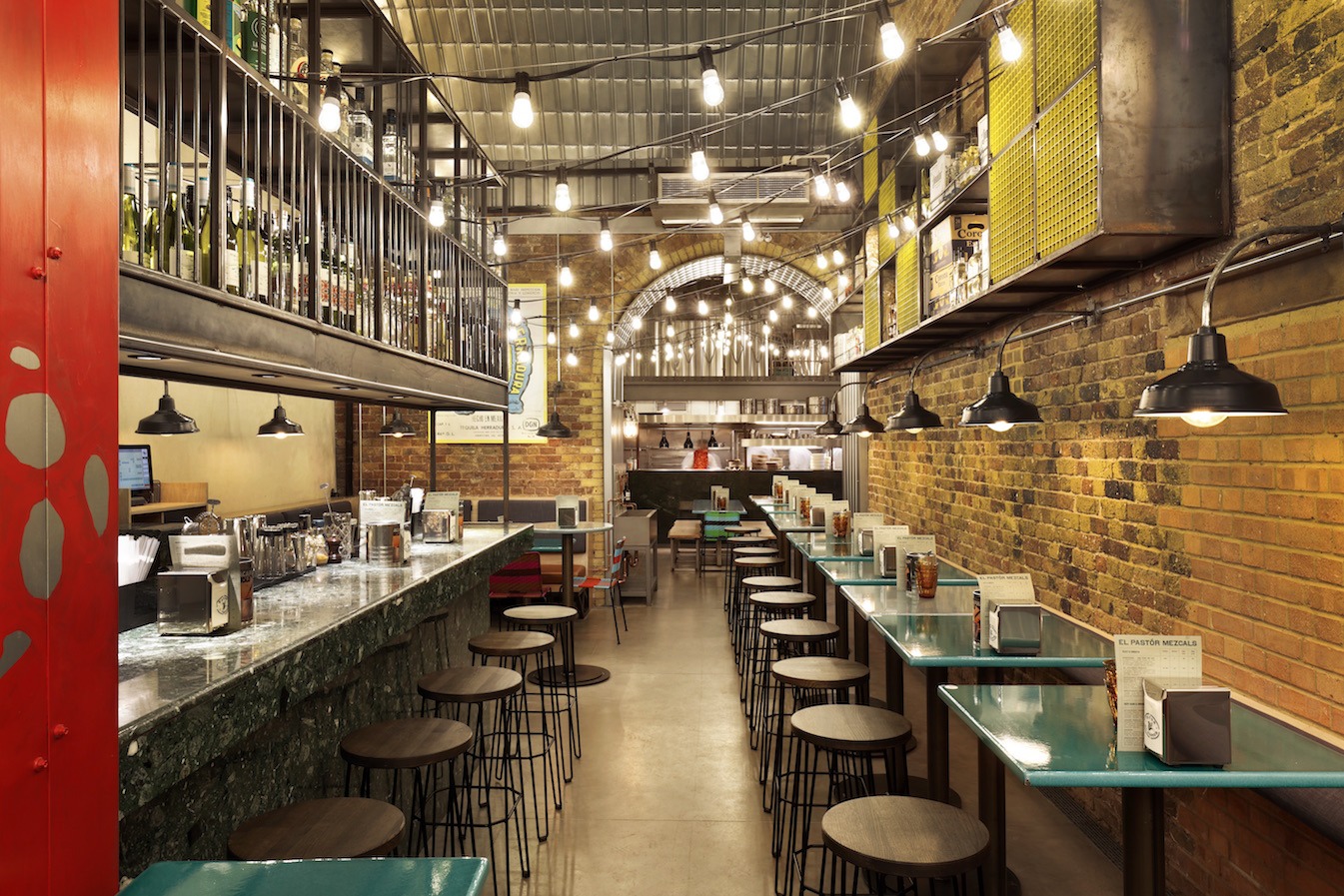 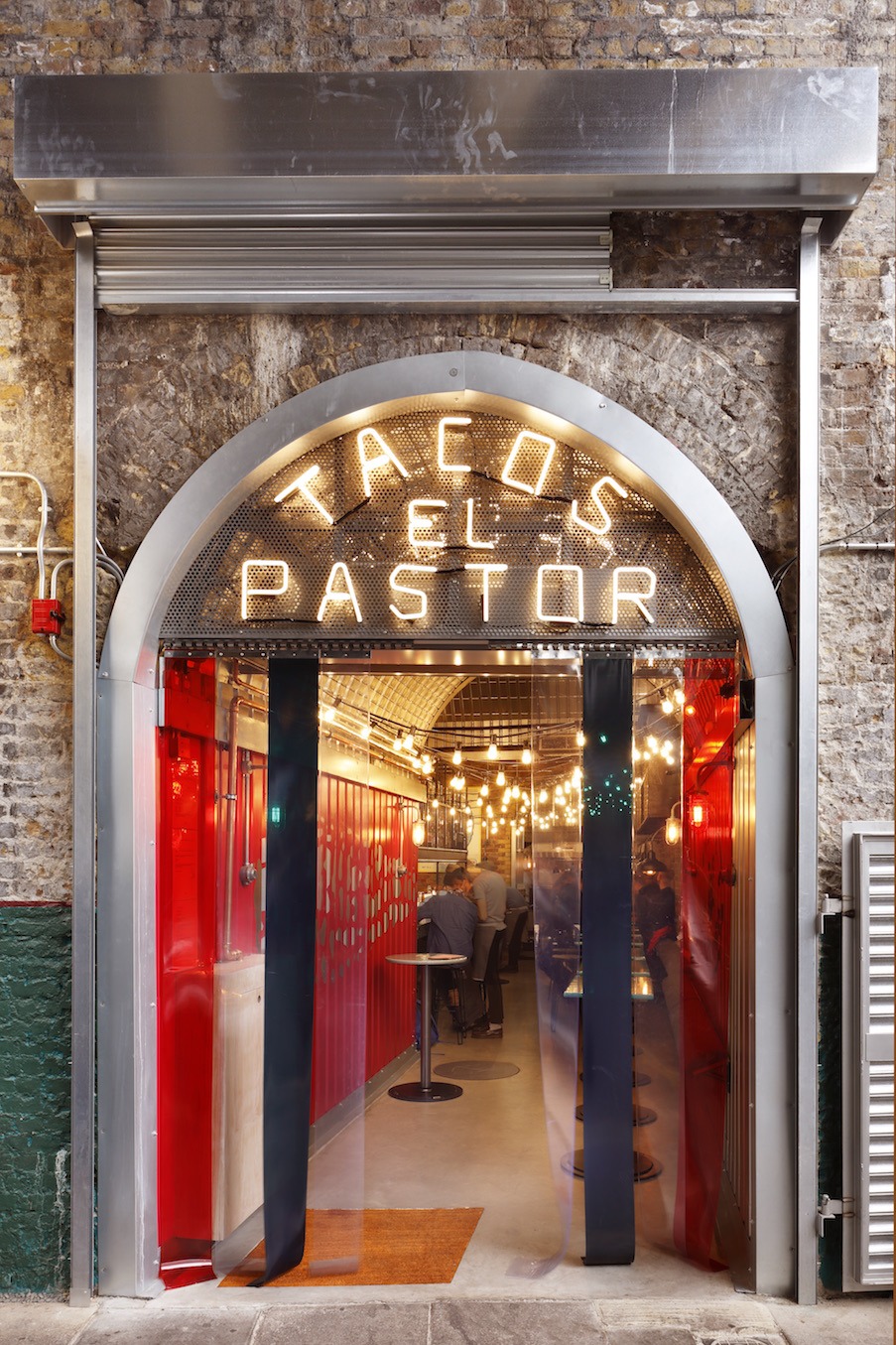 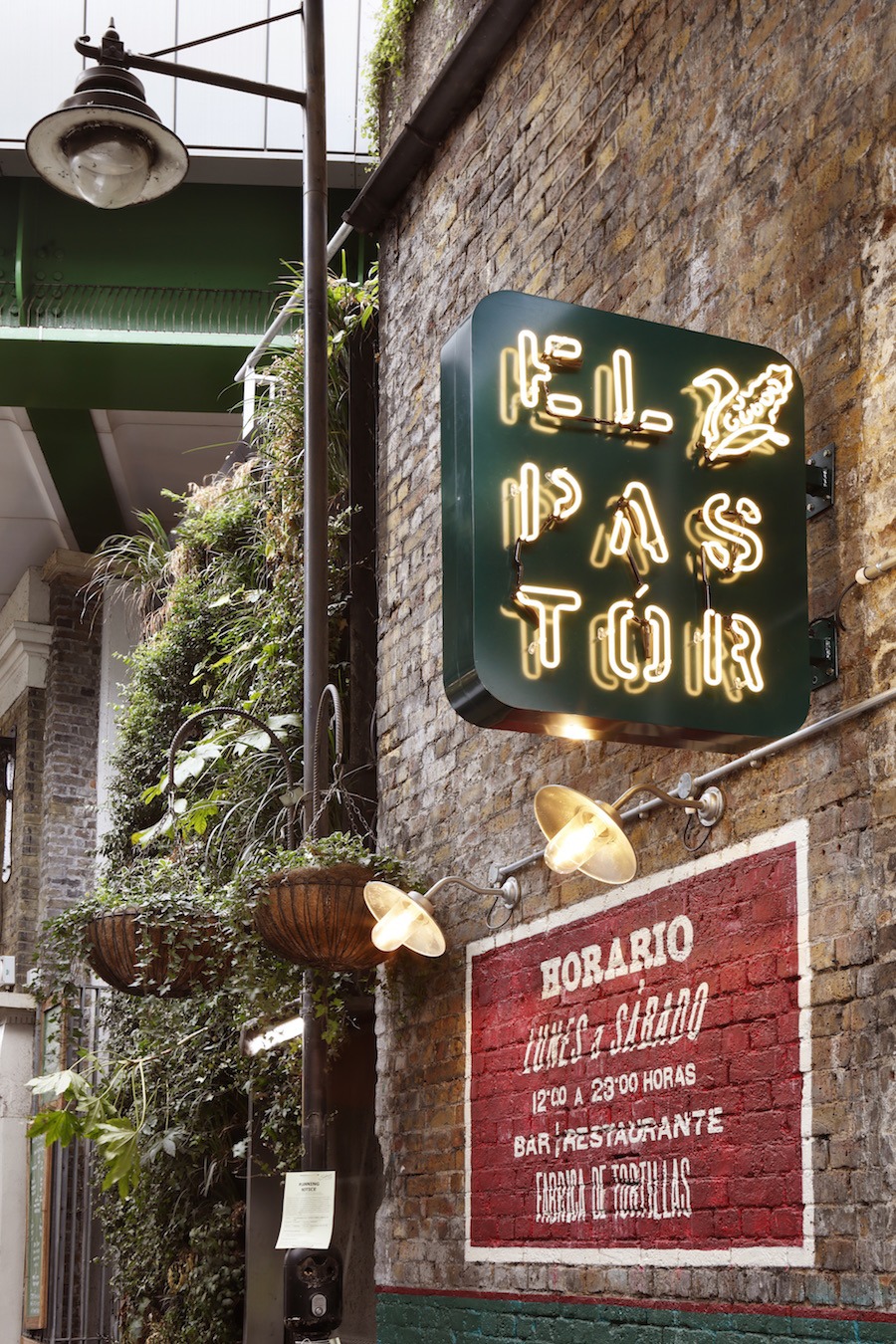 With bold tones, flavours, scents and sounds, it is difficult not to imagine oneself as right in the heart of Mexico City when at El Pastór. The uncompromising atmospheric warmth and cultural verisimilitude achieved through Michaelis Boyd’s masterful command of the interiors conjure up soft warmth of sublime, summer evenings spent in the company of friends and lovers. By translating elements straight from Mexico City to the restaurant’s Stone Street location, the sounds the ring in one’s ear, the sights that envelop one’s eyes and scents that fragrance the room are that of Mexico City’s, even though they are encountered in the heart of London.

All images courtesy of Alexander James 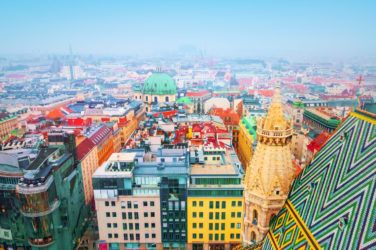 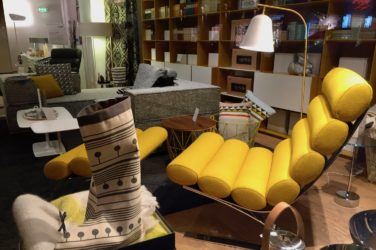 It hasn't always been the hippest city in Europe, but Vienna is one of ... 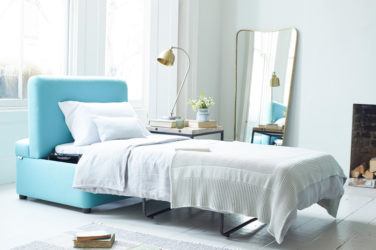 Five Clever Ways to Make the Most of a Small Home

When every square inch counts it’s important to make the most of your space! ... 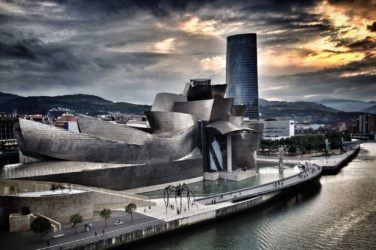 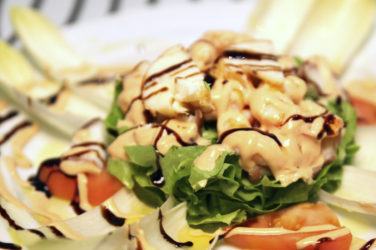 Bilbao is known throughout the world for its stunning architecture and Basque culture. Bilbao ...