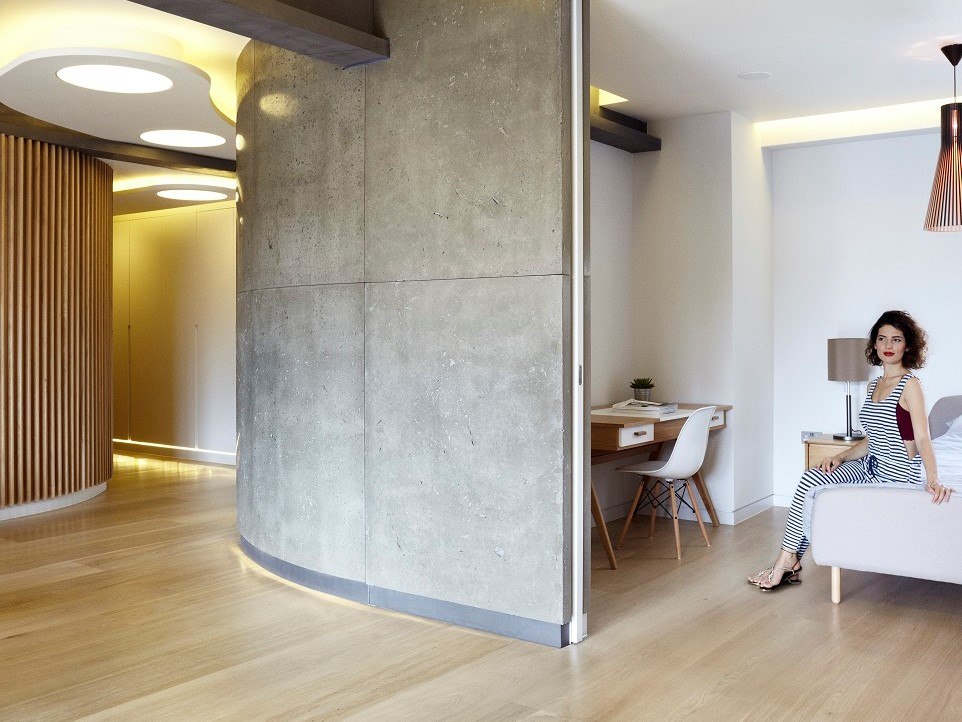 There’s often very little argument when somebody says something along the lines of no place being quite like Shoreditch. Its period buildings and characteristic ‘grit’ echo to the area’s industrial, blue-collar past, where interspersed against these ageing architectural forms, murals and wall art refashion the streets of the London district as a cathedral to the young and creative. It might not be entirely out of the question to posit Shoreditch as a state of mind either. It unapologetically carries an art-centred energy that is loud, spirited, and most crucially, wholly self-confident. In the most beautiful sense of the sentiment, love it or hate it, Shoreditch simply does not care.

That said, for an attitude as big and powerful as Shoreditch’s, it is nevertheless an incredibly elusive one to pin down- and the very idea of capturing it is an unenviably tall order. Certainly, just when you’d think it a task that’s simply impossible, one Redchurch Street apartment will soon have you thinking otherwise.

Located at the heart of the London district, the Redchurch Loft is a mix of nine loft/warehouse style apartments. The award-winning, London-based architecture practise, Studio Verve, was commissioned to design the interiors for the largest of these. Having started tabula rasa, Studio Verve’s marriage of raw, viscerally earthy textures and a modernistic inquiry into form arguably captures the rough-around-the-edges spirit and artsy glow of Shoreditch, whilst also evoking a sense of luxury and opulence with the home.

In Studio Verve’s own words, the Redchurch Loft was ‘conceived as a swirling fluid progression of spaces’. To bring this vision to fruition, Studio Verve composed the home with architectural and stylistic motifs that both bound together and smoothly transitioned its various zones and domains. 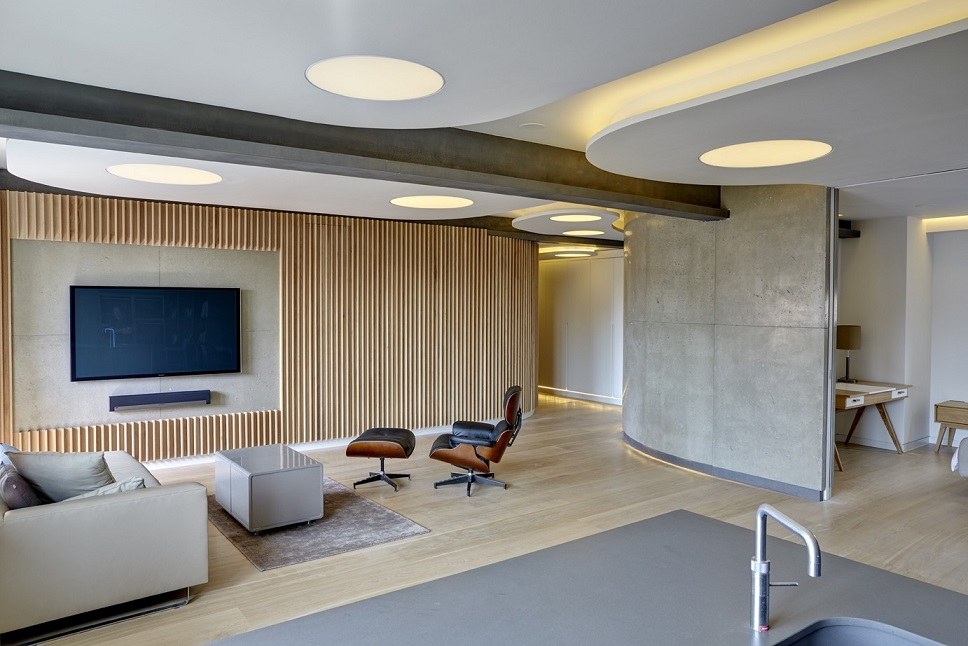 In pulling this off, keeping spaces open-planned was imperative. Consequently, the home’s zones are wide and expansive; the arced walls that delineate the home’s various spaces also permit somewhat smoother, natural modes of navigating the home, breaking from the tired, right-angled mundanity of conventional floor plans. Paired with a series of cloud ceilings dotted along the off-white, ceiling-sky, the apartment effectively breathes; it is an open, unenclosed, and most vitally, a light, natural-feeling space. 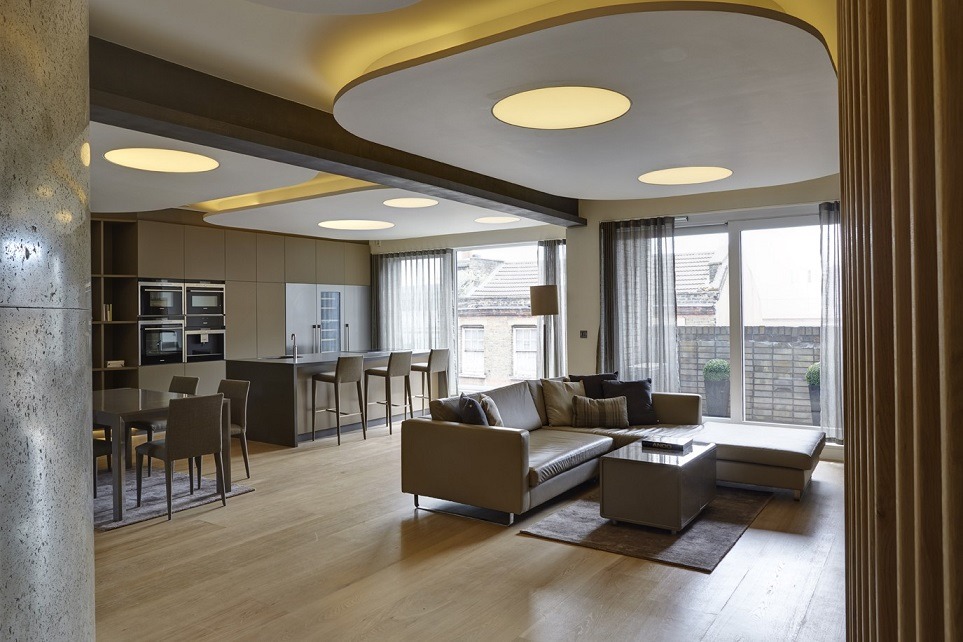 The apartment’s textural and tonal palettes endure as constants also, visually uniting the apartment and adding to the narrative of the fluidity of its spaces. The walls are clad in bespoke, pre-cast concrete panels that inject a notably ‘Shoreditch’ neo-industrial rusticity and ‘grit’ into the home. These are gorgeously complemented by the white oak touches to both the walls and flooring.

The pale golden hues make for a striking, though unobtrusive, counterpoint to the steely greys of the concrete, injecting a wholesome warmth to the apartment’s spaces. This interplay is carried on a textural level also, the natural grain of the wood offsetting the tactile ruggedness of the concrete. This marries together the home’s open planned living and kitchen areas, extending to the bathroom, bedrooms and balcony areas also. 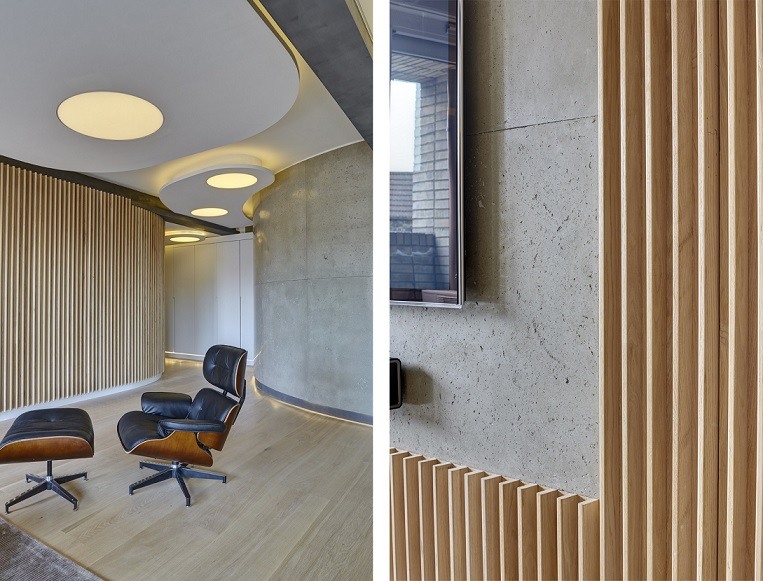 The genius in the pairing is observed in the way it affords the home with both a rich, textural complexity and an astounding sense of lightness- which is all the more accentuated through Studio Verve’s masterful orchestration of lighting.

An assortment of linear skirting lights softly delineate the various lines and cartographies etched into the home. Visually, this also administers an airy, weightless quality to the room, fashioning the walls so that they give the illusion of levitating above their foundations. 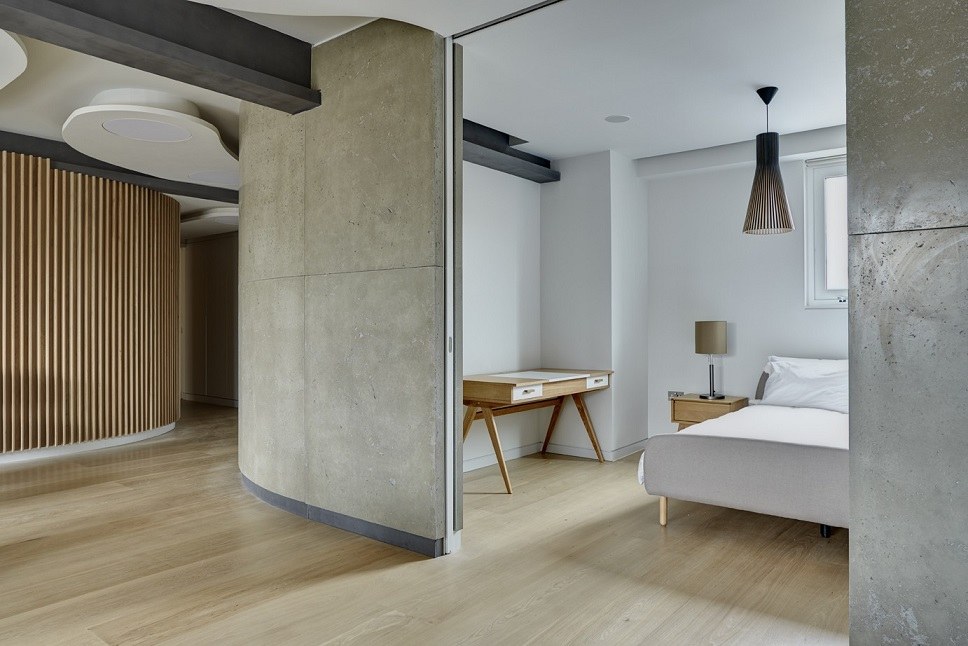 The cumulative effect of the above elements fashions the apartment as a truly poetic space; in much the same way a pen elegantly glides across a page, one traverses through the Redchurch Loft in much the same manner. Unencumbered by rigid or closed-off spaces, movement amidst the home’s various zones is a wholly natural, fluid experience. 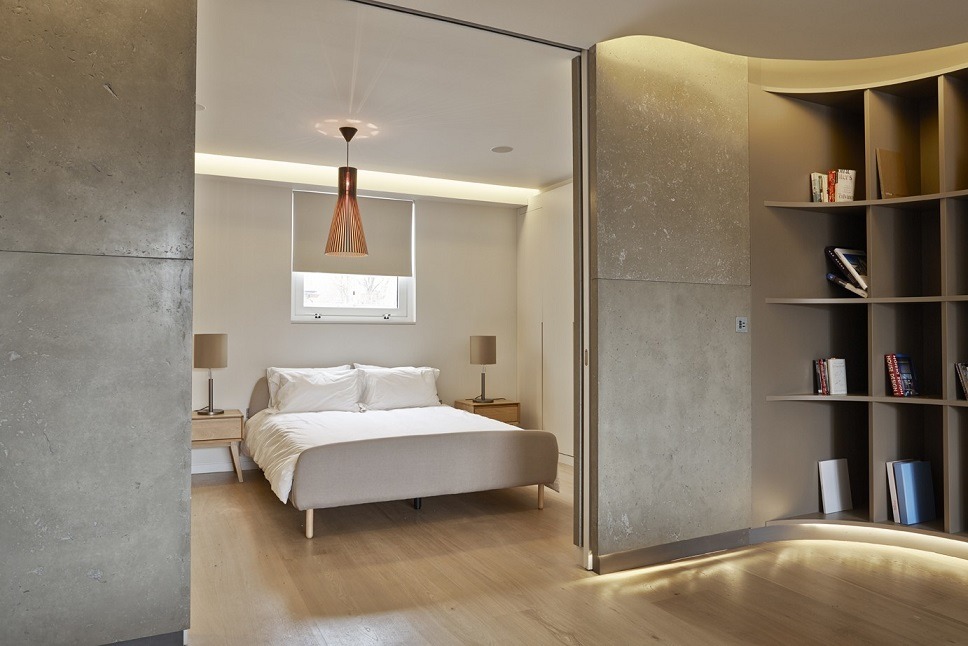 Studio Verve fashion the Redchurch Loft as a defiantly modernistic domain. The space does away with the archaic frills and excesses of traditional design, on the contrary opting for a philosophy of clean lines and bold shapes. Certainly, in the way of interiors and modernistic thought, the open-plan living room and kitchen areas are a masterclass.

Linear oak instalments on the feature wall exude both the symmetry and simplicity contained within this modern style manifesto, whilst also offering continuity with the wooden tones found on the floor. Much of the furniture is also fashioned in the mid-century vein, inspiring a historical depth into the home whilst visually making for enchantingly striking accent points against the neutral greys, wheats and stony browns that comprise the home’s base tones. The focus on simple forms is similarly carried into the kitchen. 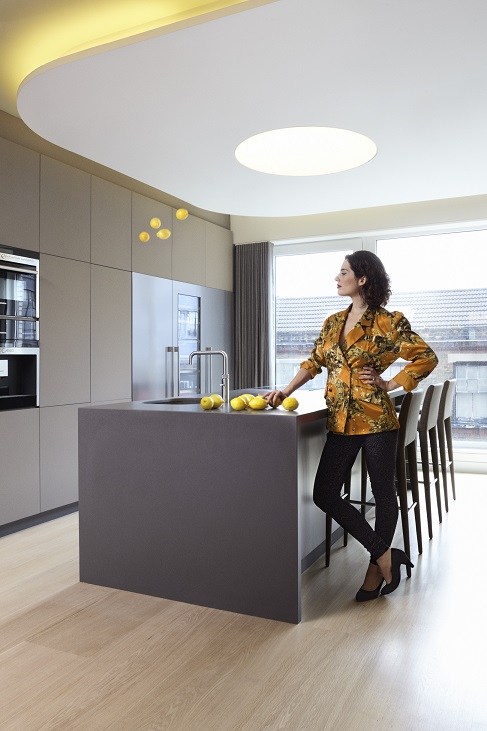 The rudimentary silhouette of the island exudes the idea of no frills, on the contrary, boasting an understated elegance with its purple-grey hued, stone finish. Cupboards and kitchen appliances are installed so that they sit flush against the wall, lending to the clean, undisrupted lines and contours that run throughout the home.

The study similarly follows in this vein. It maintains the sober, earthy greys and pale wheat tones and the formal minimalism observed in the home’s other spaces. However, Studio Verve’ shift in gears with this space cannot go unnoticed. Lighting on the trim on the ceiling’s cloud panel somewhat vitalises and invigorates the study, the fresh-faced, tonal confidence marking it as a notably creative environment. 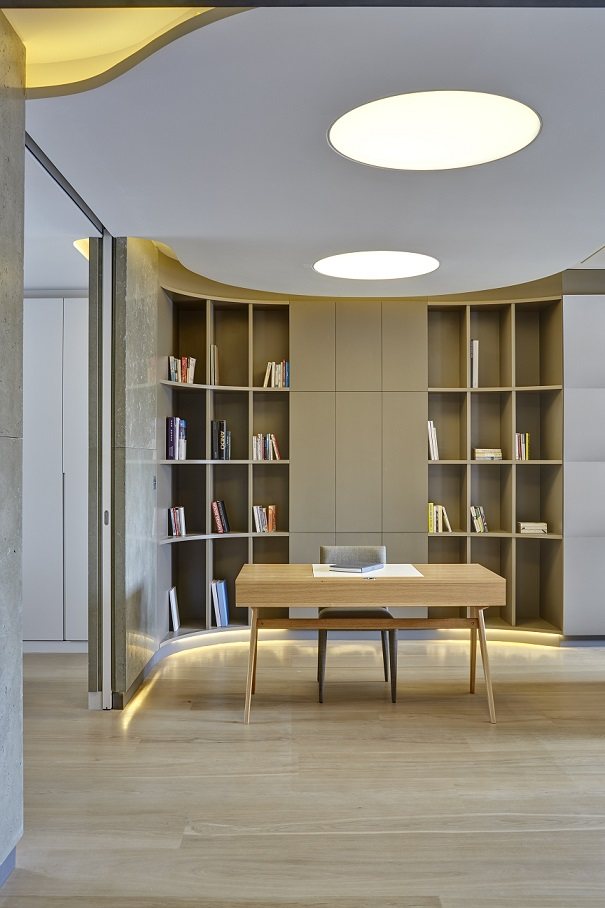 Clad floor to ceiling in stone, the bathroom retains an earthy, elemental ambience compared with the rest of the home. The raw, tactile edge to the space provided by Studio Verve’s liberal use of stone in the bathroom’s interior defines the bathroom as a truly tranquil zone, which, paired with the minimalist form of the white stone bath, denotes the space as one of holistic relaxation both in body and mind. Brushed metal accents injects a steely, metropolitan coolness to the space also, exuding an air of elegance and finesse to the bathroom’s distinct brand of modernity. 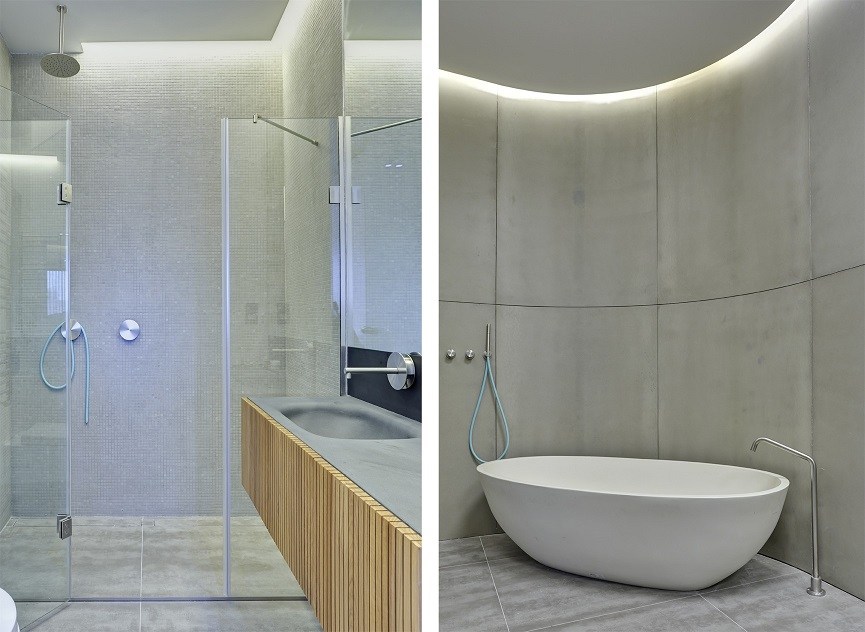 Boasting an assortment of mid-century appointments that match gorgeously with the bronze and grey tones at play, Studio Verve were able to inject a notably retrospective, art-deco air of opulence and flavour to the apartment’s bedrooms.

Paired with furniture and feature walls that exhibit strongly figured wood grains, Studio Verve similarly accentuate on the narrative of luxury associated with these spaces. Like much of the home, the bedrooms exhibit the crisp lines and geometries that gives the home its modernistic edge, re-establishing the apartment’s arc as a twenty-first century, metropolitan home. 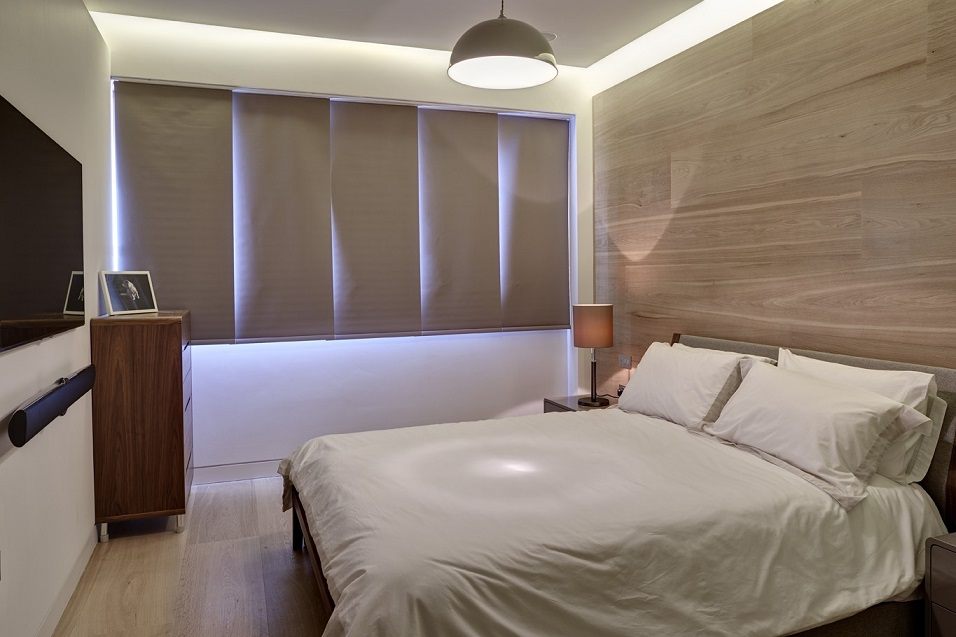 Studio Verve’s interior design of the Redchurch Loft can be said to tick many boxes in the way of capturing an authentically Shoreditch attitude. It is undeniably youthful. Studio Verve’s inventive methods by for delineating space, using arced forms and boundaries, arguably hails the two finger salute to the tired rule-books of convention spatial practise. This is similarly observed in their bold exploration of shape, form and colour, observed all over the home.

Similarly, the heavy, decorative use of concrete gives the home a no-frills, rough-around-the-edges pluck. Certainly, the confidence with which these dressed-down structural elements are exhibited endows the home with bucket loads of personality. These youthful and raw elements insert a carnivalesque energy into the Redchurch Loft, making for a somewhat theatrical spatial experience when traversing through its adventurous cartographies and terrains. 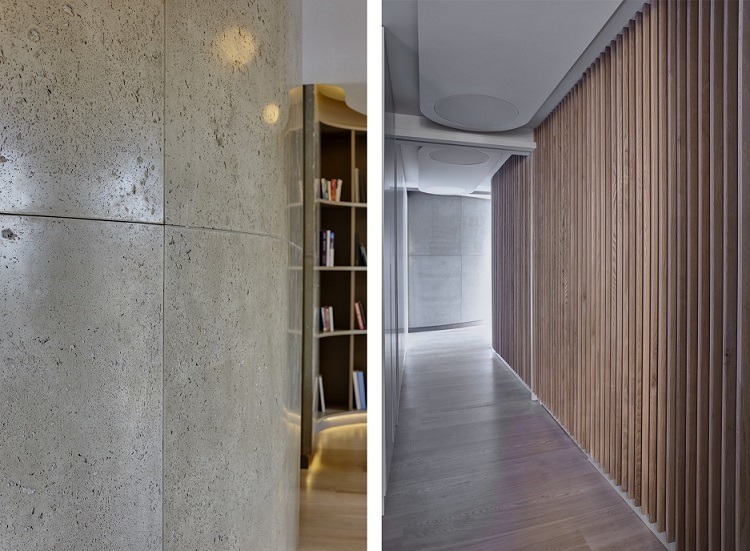 That said, the particular genius in Studio Verve’s design is the way the Redchurch Loft negotiates the above-mentioned whilst also being a definitively luxurious space- the home channels a distinctly upmarket mode of modernity in the cool, un-congested and suave composition of the home’s spaces. It comes as no surprise, therefore, that the home has won over architectural publications and admirers alike–and certainly, having taken a brief tour, it’s not particularly difficult to see just why.

Photographs are © and courtesy of Luke White and Romain Forquy for Studio Verve. 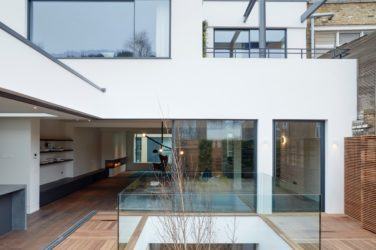 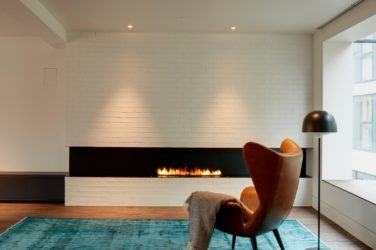 East London Industrial: A Residential Refurbishment inspired by an Ironmonger’s

Neatly fitted between an office building and an apartment block on a quiet side ... 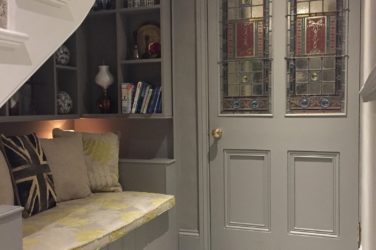 Breathe life into unused spaces in your home

Do you use every room or are there some spaces and neglected areas? Here ... 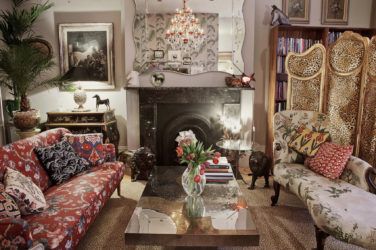 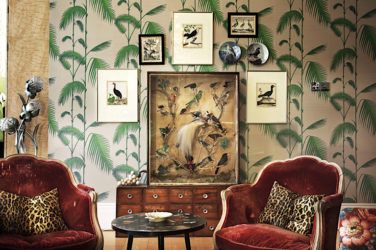