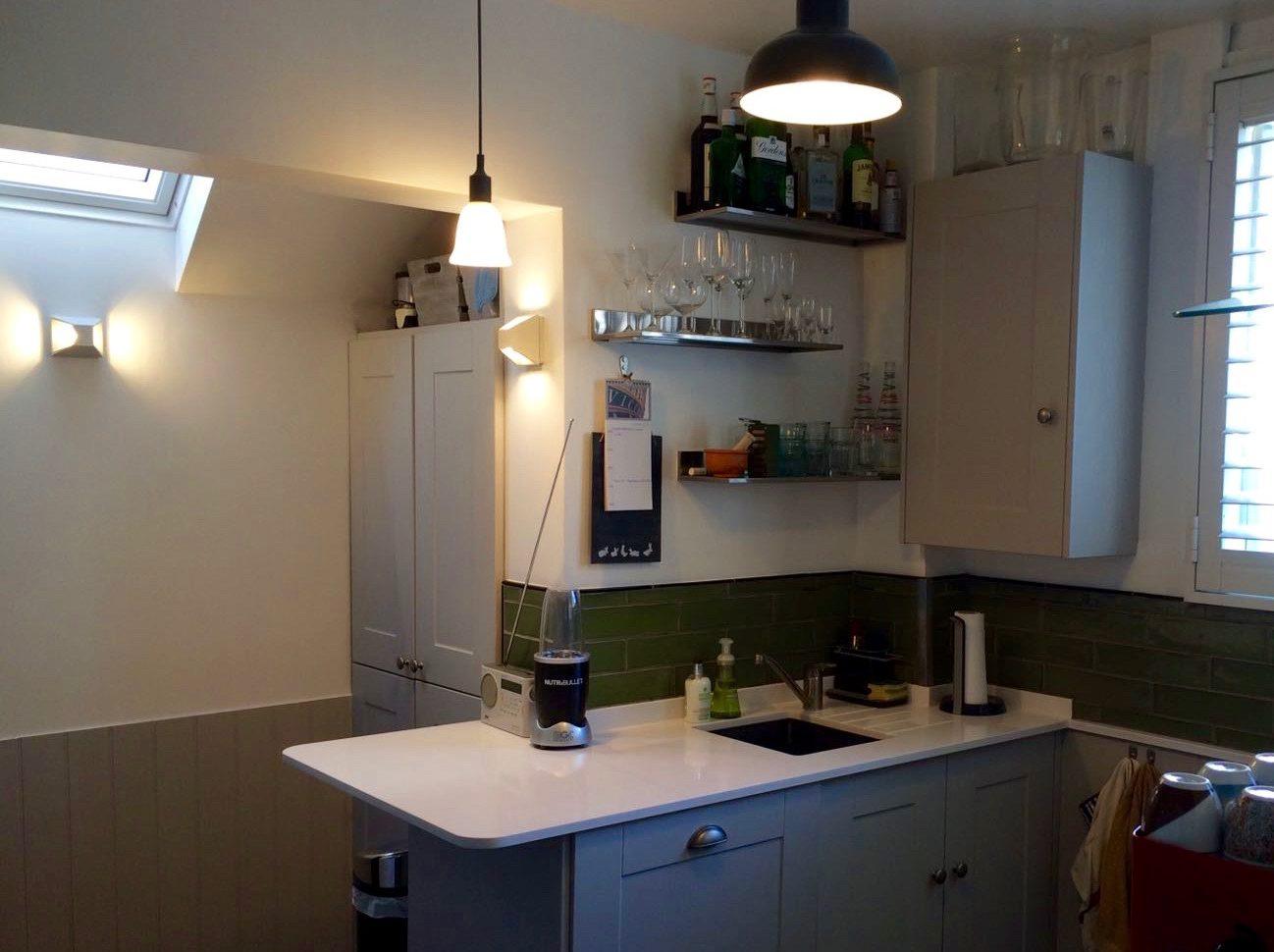 Alex and Tom live in a Victorian cottage in Guildford, having moved there from an Edwardian maisonette in north London. They were looking to move out of London to better reach Alex’s new job and to realise the value of the London property they had owned since 2007. From the start of their house hunt, they knew they had very exacting requirements: tired of living above or below, they wanted a detached house, they wanted a good size garden, and a decent kitchen – Tom’s domain – for both cooking and informal entertaining of friends and family.

They had the good fortune to land on a detached two bedroom house in Guildford town, five minutes from the high street and one of only two detached houses on a road of Victorian terraces. There was only one problem: the kitchen was a mess. There was very little natural light, an awkward utility/pantry area and both too much eye-level storage and too little in the way of decent work surfaces and white goods. So, they took a sledgehammer to it and over a period of time and with the help of a range of suppliers, artisans and Alex’s own honed DIY skills, they started over.

IDEALIST: You have a beautiful house in a nice area. Why did you feel the need to start again with the kitchen?

Alex: Thank you. Everything else about the house we loved, but the kitchen let it down. It was poky and gloomy and hard to work in. We didn’t want to encroach on the garden, as we are passionate about both cooking and gardening, so we set about renovating the kitchen within the confines of the available area. We wanted to deliver a fully equipped kitchen to our own spec by creating a new space, and increasing natural light, but without having to extend the footprint of the house.

IDEALIST: Looking at the photos from when you started the renovation, it’s hard to recognise the space you have now. Can you tell us more about what it looked like?

Alex:  That picture was when we moved in – in ‘sale condition’ and looking its estate agent best, but it doesn’t hide the design faults:  the wall units overhanging all worktops created a claustrophobic sense. It had poor natural light and an under-counter fridge inadequate for keen cooks, just as was the feeble unvented cooker hood. The slimline dishwasher was useless after Sunday roasts and the kitchen suffered from those classic inaccessible corner cupboards that were a continual frustration.

But via a door (just to the left of this picture) there was a single brick-depth uninsulated  room on the side which served as a pantry and housed a small freezer, washer-drier and the boiler. Incidentally, the washer drained into the soil pipe as the space had been the original semi-outside toilet.

IDEALIST: So it quickly became a building job, rather than just changing the kitchen units?

Tom: Design was actually quite organic. Using a trusted team of three (one a family member in the trade) we first created a new space by knocking down most of the wall into the ‘pantry’. This required a new RSJ to replace the original 1890s wooden beam. The single brick depth pantry was insulated and plastered and a new Velux window was added to increase the natural light. It was only then that we made decisions about where to place the units, sink, ovens and hob. A galley style arrangement for the work surfaces was chosen to clear the way to the window and to give more space and remove the hated corner cupboards.

IDEALIST: How did you source the units and white goods?

Alex: Most units plus the hob and ovens (lx and dual/microwave) came from Wren. They were really good to work with and really understood the brief which was to bring modern functionality to the space, while being sympathetic to the Victorian origins of the house. We chose a ‘Shaker’ style with some tongue-and-groove accents in French Partridge grey which lent traditional flavour that wasn’t ‘twee country’.  The fridge, washing machine and tumble dryer came from AO.com. We were worried about buying so many items ‘unseen’ and expecting them to slot into the spaces we had designed, but it all went in smoothly.

IDEALIST: And how did you deal with hiding the boring but necessary elements, like the boiler and the washing machine?

Tom: By moving the boiler — the only wall unit now and not above a workspace — we were able to replace the washer-dryer, which was always inadequately neither one thing nor another, with a stacked washing machine and separate exterior vented dryer fully enclosed in full height doors, which we adapted from basic Wren units.

IDEALIST: Is everything else from the high street, or did you use local suppliers?

Alex: It’s a real mix based on what we felt would work best and fit our budget. The floor tiles and green wall tiles from B&Q, white the Silestone quartz worktops from a Hampshire stonemason who also fitted them. Lighting and steel shelves were both Ikea and specialist online suppliers – the only thing ultimately aside from good quality is the look.

IDEALIST: And who did the rest of the work?

Tom: A significant amount of the work was done by Alex himself who has honed his DIY skills in our previous three properties: floor tiles laid, tall broom/gas meter housing cupboard built to match Wren units, and the green glazed tiling above work surfaces were his work.

Alex and Tom have done a great job here which will only add value to their Victorian house. They are fortunate to have moved out of London into a detached house where they have the freedom to rework the space to best serve their needs, but here at The Idealist we think they were smart to keep within the original constraints of the house, rather than build a modern extension which would compromise the look of what is a very elegant Victorian villa. Overall, a confined space that was ill served by poor design has been transformed to a compact fully equipped kitchen featuring all their major wish-list items (including the wine fridge!). 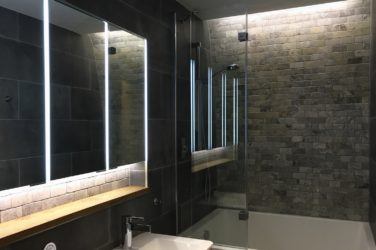 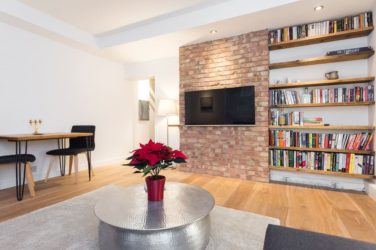 For many of us city dwellers, we are resigned to living in a one-level ... 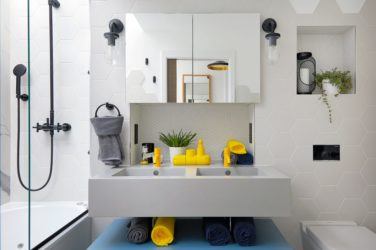 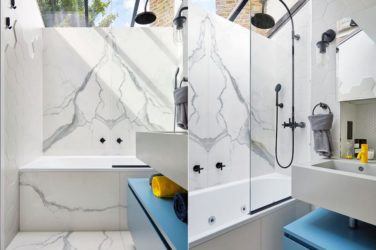 Remodelled by Kia Designs, the bathroom in question is an ensuite, part master bedroom ... 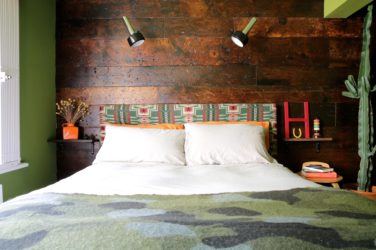 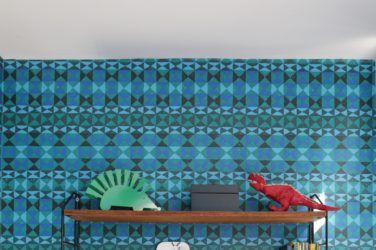 A Garden flat for a Growing Family in Muswell Hill

In our final home from Sarah Thomas Interiors, we are visiting a beautiful garden ...