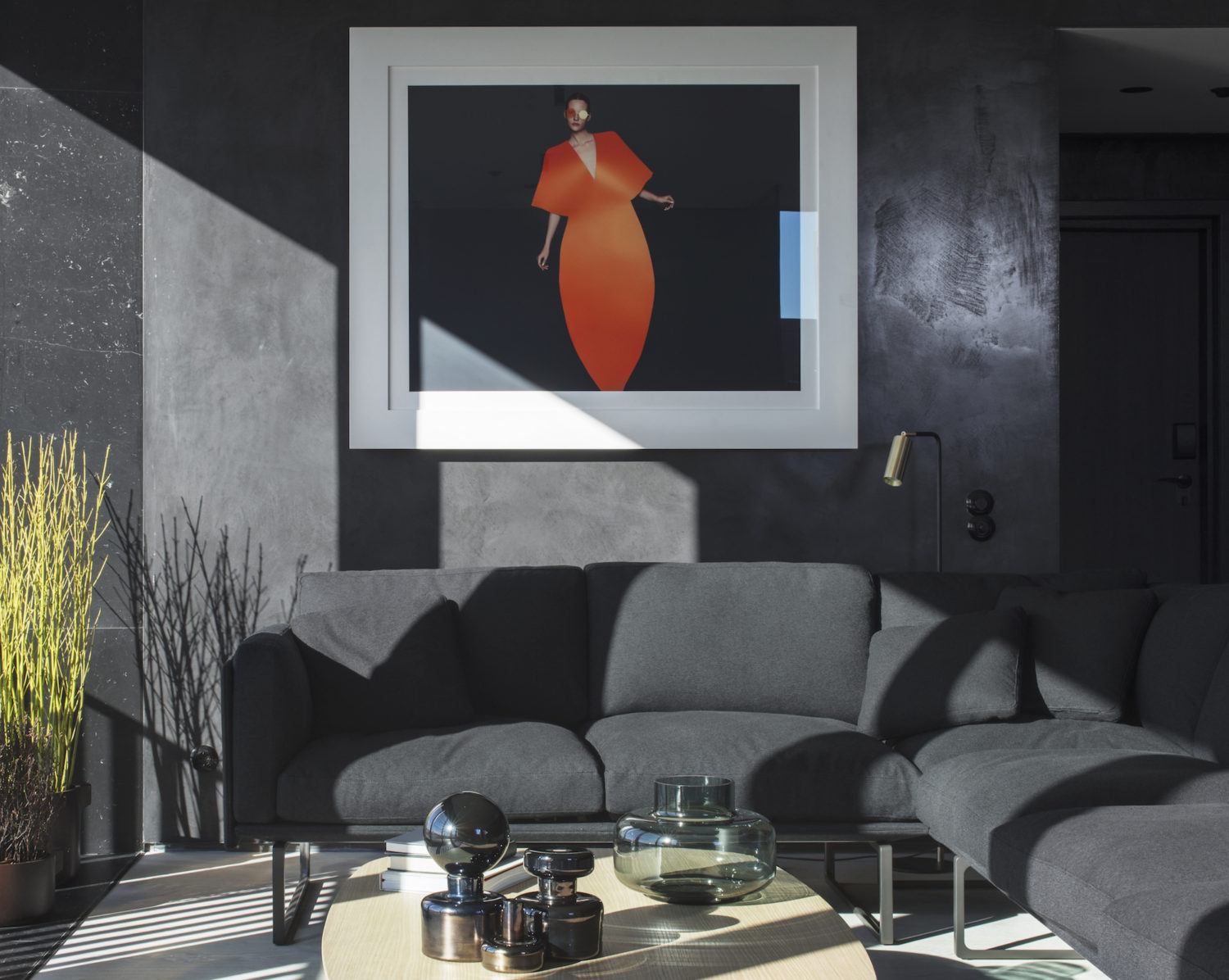 When we wrote our city guide to Stockholm, one of the places we didn’t know about was At Six, in Stockholm’s Brunkebergstorg Square. Opening this month, it’s an amazing transformation of a brutalist 1970s high rise building that previously housed the HQ of Swedbank, although unlike the new Ned Hotel built within the former Midland Bank in London, it is at least a building that was originally designed as a hotel, but until now has never been used as one.

Like most places, Stockholm suffered/enjoyed (depending on your viewpoint) the sweeping zeal for brutalism in the 1970s, which led to many belle époque squares being replaced by concrete. 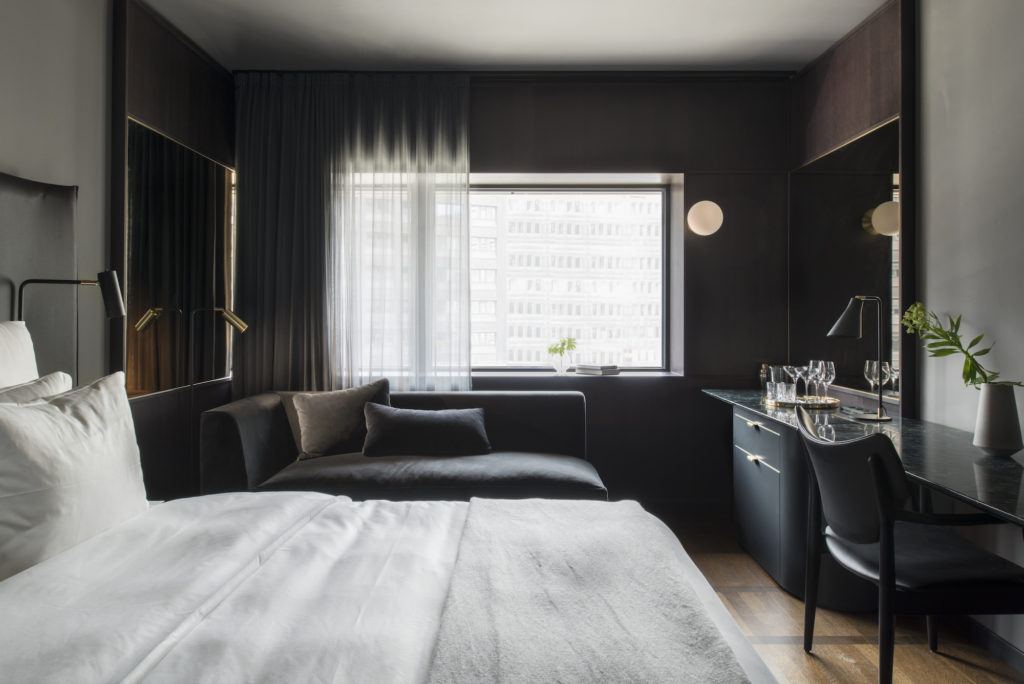 The owners have approached the renovation with real imagination. They tell us it will house one of Europe’s most ambitious modern art collections (and mention the likes of Julian Opie, Sol Le Witt, and Tacita Dean) which will be curated by Sune Nordgren, formerly of Gateshead’s BALTIC Centre for Contemporary Art.

The interior has been reimagined by London’s Universal Design Studio and features local and classic furniture, custom lighting and local wood. This was no simple makeover though – they also added three new floors to the building, a bunch of restaurants, a gym and a wellness centre.

The look throughout is sympathetic to brutalism, but has touches of luxury throughout: think sawn stone, blackened steel, polished granite and rich timber. Universal’s brief was to humanise the building: adding touches of luxury and elegance to what would otherwise be a stark building to reinvent the grand hotel of old for the modern age. 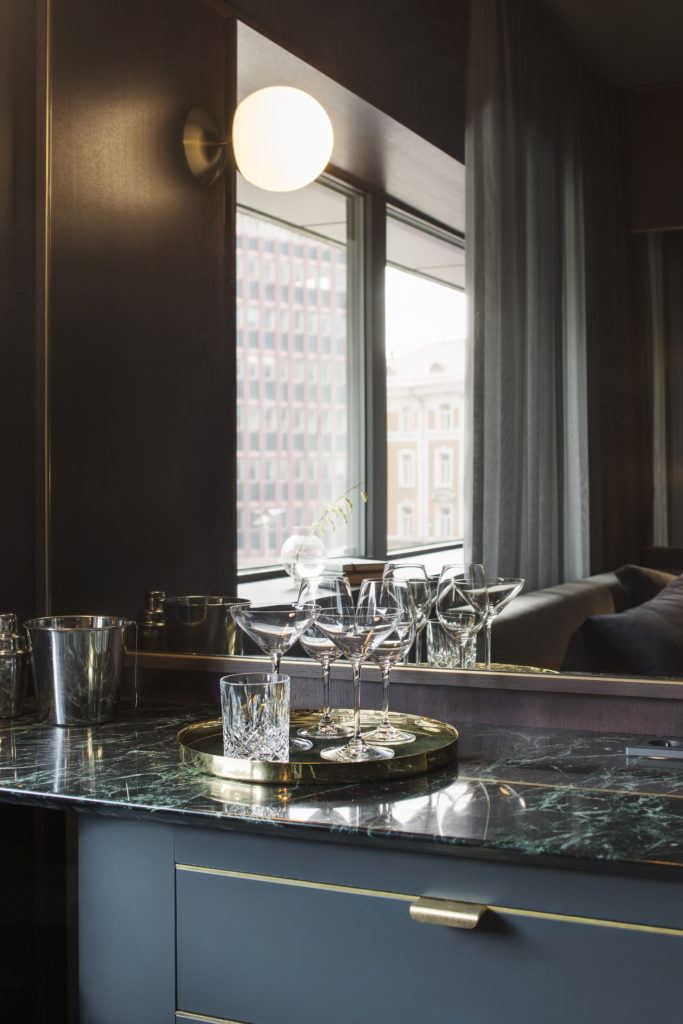 Get the Look at Home

We love the look that Universal have achieved in the At Six hotel. We also have a soft spot for concrete, brutalism and rich midcentury furniture, so we love that they’ve worked ‘with the grain’ by celebrating the building rather than hiding it. Here’s how to take inspiration from some of Universal’s ideas.

The starting point of the redesign of the hotel was the architectural context of the city square it sits in and the béton brut of the building itself. Rather rather turning its back on the grey of concrete, they’ve embraced it. Grey can be a warm and rich-looking colour if used right. We’ve featured concrete shades of paint before and there’s even concrete-style wallpaper you can get hold of to add texture to a scheme too. We also love this faux fur throw from Feather & Black which gives elegant cosiness to a monochrome scheme. Don’t overdo it with grey: the trick in the hotel is to contrast grey with classic furniture, light colours and punchy art. 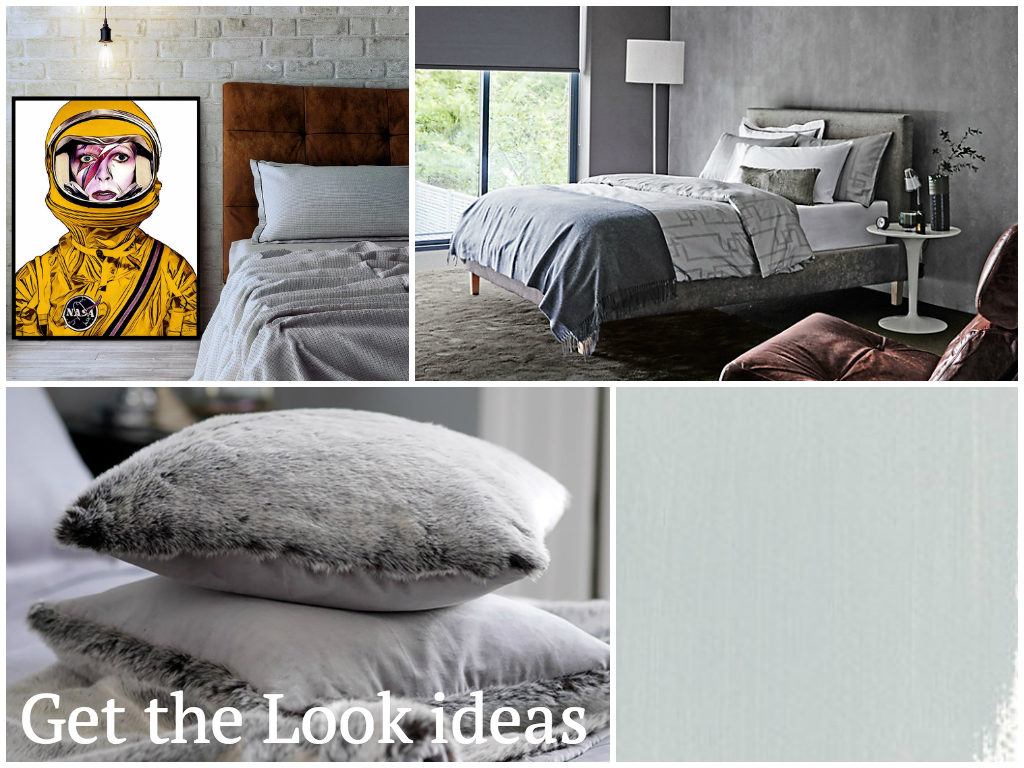 For some bright art prints that sit well with modern schemes, take a look here.

Black, walnut, copper, brass and marble are all really in vogue right now and bring a rich luxury feel to any bedroom or living room scheme. We’ve featured Tom Dixon lighting in a number of our shopping guides and we’re big fans of Buster & Punch too. Whatever you do, make sure you tie it together well — gold, copper and brass for example all together work well but too many metals can look cheap.

3. Play with scale and mass 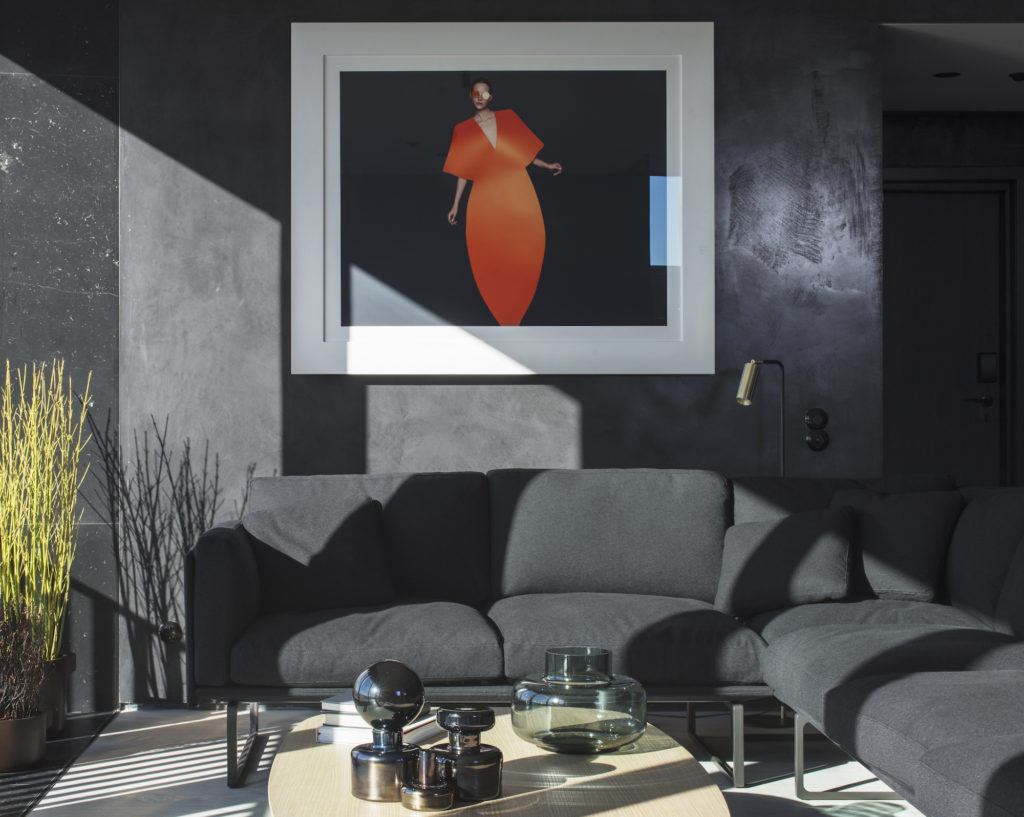 An interesting aspect of these high-end design schemes is the contrast between elegant, fine accessories with chunky, solid woods and marbles. We love the chunky smoked glass and metal accessories on this coffee table. 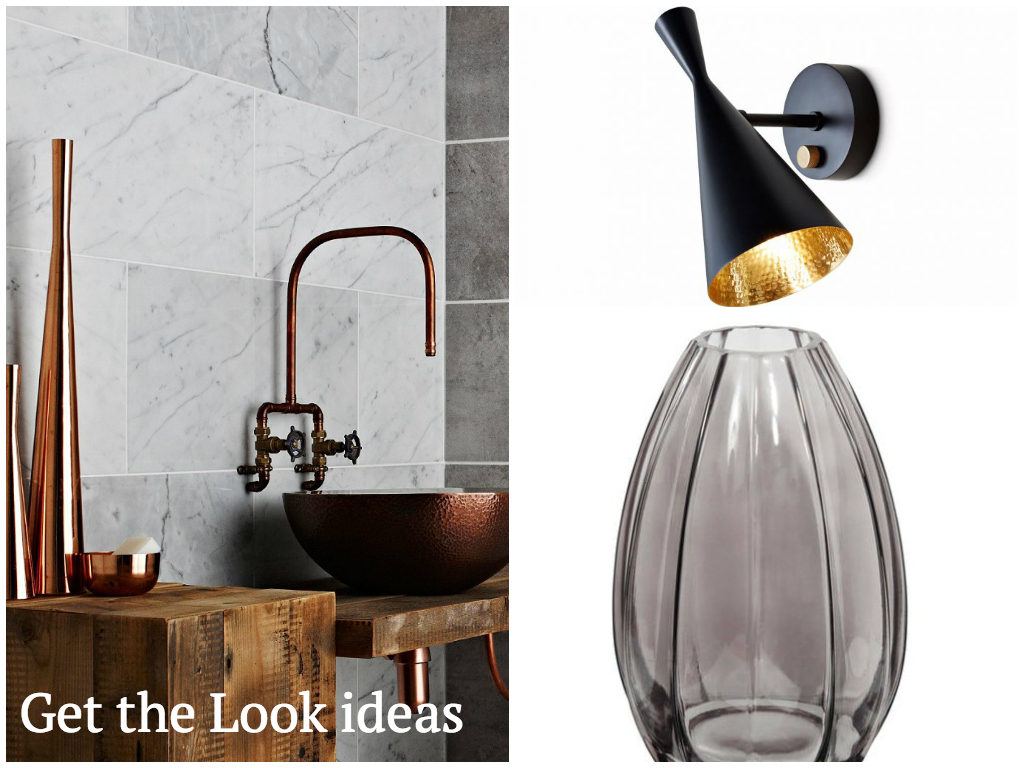 4. All white bathrooms are boring

There’s much more bathroom choice on the high street than there used to be both in colours, materials and finishes. You may not be able to stretch to a carved marble free-standing bath like here, but marble and marble effect tiles or deep grey floor tiles can add a spot of luxury to a regular bathroom. Remember the duplex makeover we saw with the Japanese bath? We love these Statuario tiles from Topps tiles made of pure white natural Italian marble. 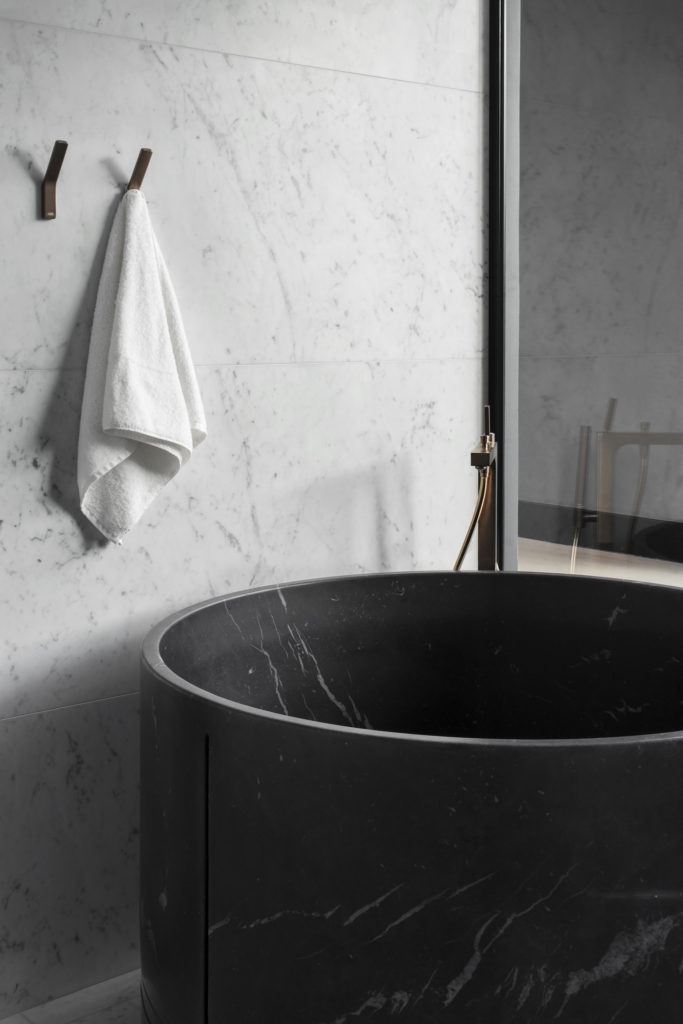 If you’d like to stay at the At Six hotel, take a look at their website. They have 343 (beautifully designed) rooms. Flights to Stockholm from London Stansted via Ryanair start at £42. Easyjet flies from Luton and British Airways from Heathrow.

All hotel photos from At Six are (c) and courtesy Andy Liffner.

Get the Look: Citrine and Olive in this Vitra-inspired living room

Welcome to the Tripster Surf Hotel on the Côte d’Argent 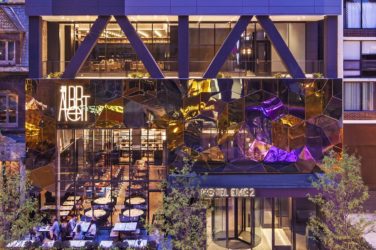 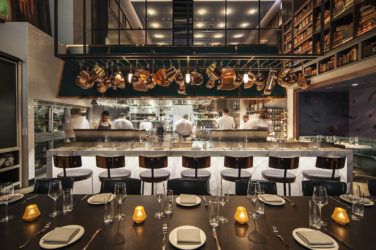 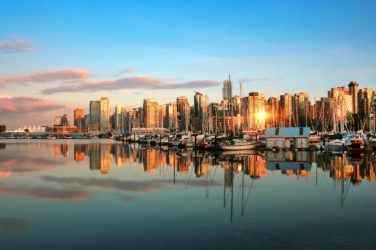 On the west coast of Canada is beautiful Vancouver, a city that boasts mountain ... 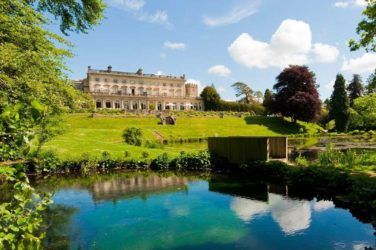 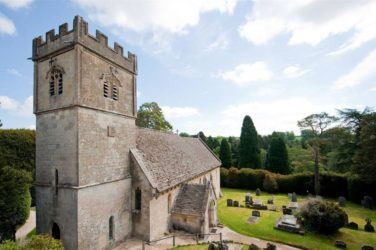 Cheltenham’s spa legacy is by no means a thing of the past- the town’s ...